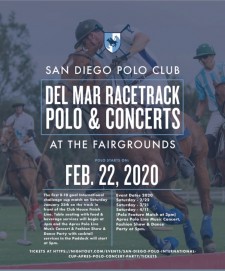 Front-row Club House VIP table seats, as well as General Admission Club House table seating, with food and beverage services during the match can be purchased at https://nightout.com/events/san-diego-polo-international-cup-apres-polo-concert-party/tickets, as well as on TicketMaster.com through the Del Mar Fairgrounds Tickets Box Office. The tickets to the game include admission to the apres polo concert and Havana Nights-themed dance party in the paddock.

San Diego has featured some of the best polo events in the nation for the last 30 years, and for the first time ever, the polo matches and the apres polo concerts and parties will be held at the Del Mar Fairgrounds right at the race track where the Surf meets the Turf. In addition to the event on Feb. 22, San Diego polo events are also planned with the Fairgrounds at the Del Mar Race Track in March, April, and May. All proceeds from all San Diego Polo events at the Del Mar track will go to benefit the Helen Woodward Animal Shelter. https://animalcenter.org