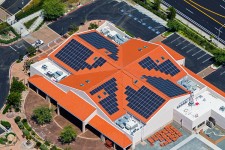 San Diego, Calif., June 6, 2017 (Newswire.com) - Eleven Catholic churches in San Diego County have converted to Sullivan Solar Power since Pope Francis released his encyclical, “Laudato Si’,” two years ago this month. Catholic leaders have been urging parishes to go solar since the 192-page paper highlighted climate change as one of the primary challenges facing the planet and urged people to take action. Last week at the Vatican, Pope Francis gave a copy of Laudato Si’ to President Donald Trump, telling him it is about “care of our common home, the environment.”

“Never have we so hurt and mistreated our common home as we have in the last two hundred years," said Pope Francis in the encyclical, “Reducing greenhouse gases requires honesty, courage and responsibility.”

The13 Catholic churches that have converted to Sullivan Solar Power are collectively account for 1,209,417-watts of clean energy. The output equates to 906,977 pounds of coal not burned to produce electricity or 95,640 gallons of gas not consumed.

“By adopting solar power for our church and school facilities, we are not only being good stewards of what God has given us, but also we are able to spend less money on energy and then direct those savings toward additional services for our parishioners and school members,” said Jim Gase, Plant Manager of St. Michael’s Church in a June 2015 interview about their solar project.

St. Patrick Catholic Parish in North Park has enjoyed savings from their Sullivan Solar Power system but that was not their only motivation to moving to renewable energy. Father Michael McFadden explained the reasoning behind going solar was a three-pronged approach.

“One, this is good for the environment - the Pope speaks highly of relating well to the earth, and we are supposed to be good stewards, taking care of it. Second, this saves dollars and promotes efficiency - running a school, as we do, is expensive. This saves money for other church uses. And I believe this sets a good example for the community to embrace the earth,” said Father McFadden.

While the United States has pulled out of the Paris Climate Accord, cities, states and organizations across the county are continuing to uphold their commitments to combat climate change.

“Catholic churches in San Diego are rapidly joining the solar energy revolution and showing the world their commitment to reducing fossil fuel consumption,” said Daniel Sullivan, founder and president of Sullivan Solar Power, “We are proud to be assisting local parishes declare energy independence, making our world a better place today while preserving our resources for the next generations.”

For more information about solar for Catholic churches, visit www.sullivansolarpower.com.