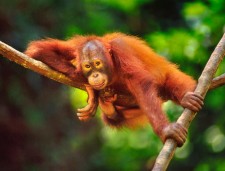 KOTA KINABALU, Malaysia, February 19, 2018 (Newswire.com) - Major newspapers worldwide have reported the findings of research that was published for the March 2018 edition of Current Biology journal authored by Maria Voigt and co-authored, among others, by Dr Marc Ancrenaz of HUTAN who is based in Sukau, Kinabatangan, and Dr. Benoit Goossens, director of Danau Girang Field Centre. The research findings claimed that between 1999 and 2015, more than 100,000 Orangutan were lost mainly due to illegal hunting and deforestation in Borneo.

It has to be noted that the island of Borneo is made up of East Malaysia’s States of Sabah and Sarawak, Brunei and Indonesia’s Kalimantan.

Without hard facts and evidence presented in the research findings, the Sabah Wildlife Department strongly refutes and disagrees with the report and will advise the Sabah State Government accordingly.

“Large numbers of Orangutans were simply being slaughtered,” said the lead researcher Maria Voigt of the Max Planck Institute for Evolutionary Antraphology, Germany, about their research findings.

The report also claimed that the loss of Orangutan in Sabah for the study period is 6,100 individuals for reasons identified in the study.

Ulu Segama-Malua Sustainable Forest Management Project was established on March 15, 2006, by the State Government of Sabah especially to protect and rehabilitate Orangutan habitat. The 242,884 ha has been reclassified in stages and by 2014, the whole area has been gazetted as Class I Protection Forest.

The State Government of Sabah is very determined to protect and conserve all our iconic species in Sabah and therefore determined to achieve its policy target to have 30 percent of Sabah under Totally Protected Areas by or before 2025.

All these efforts are directed at protecting Sabah’s rich biodiversity. Almost all of the additional protected areas are also within Orangutan habitats.

Despite these efforts, none have been acknowledged by the authors of the recent study, of which two were non-Malaysian scientists based in Sabah and working with Sabah Wildlife Department and Sabah Forestry Department as contributing factors to the conservation of Orangutan in Sabah. Instead, the study, without hard facts and evidence, has misguided the world community to believe that there were 6,100 individual Orangutans killed in Sabah between 1999 and 2015.

Without hard facts and evidence presented in the research findings, the Sabah Wildlife Department strongly refutes and disagrees with the report and will advise the Sabah State Government accordingly.

About Friends of the Orangutans