Indigenous Dayak Farmers Speak Out on Discrimination Against Palm Oil

MIRI, Malaysia, January 16, 2018 (Newswire.com) - Indigenous Dayak palm oil farmers in Sarawak state of Malaysia launched a photo campaign today to tell their side of the story on palm oil. The campaign was created to present the facts on palm oil from the indigenous farmers perspective. The organizers of the campaign, Dayak Oil Palm Planters Association of Sarawak (DOPPA) is a unique entity globally as it is the only organized group to represent the interests of indigenous small holders in the palm oil industry.

DOPPA, hopes the project will clarify once and for all, that not all palm oil causes environmental destruction and human rights abuses. Speaking in reference to a call by 174 scientists against the use of palm oil in bio-fuels which argued that palm oil causes socio-environmental disasters without exception, Vice-President of DOPPA, Rita Insol, stated:

But today we speak for ourselves as we have noticed other NGOs who are threatening our livelihoods when they attack palm oil which we rely on heavily as a cash crop to enable us to enjoy the same standards of living as these NGOs.

“We are small farmers. We work on lands passed down to us by our forefathers who have cultivated these lands for decades. Some of us have lost our lands which we used for shifting cultivation. So as we enter the 21st century, we recognize the need to create stable and permanent farms from which we hope to better our livelihoods and provide a better future for the coming generations of indigenous people in Sarawak.

”For years, we have noticed the conflicting news on palm oil. It was a source of amusement to see ‘experts’ arguing about our rights as indigenous peoples as if we could not speak ourselves. This is not true. We, as indigenous peoples of Borneo have fought for our rights for a long time already. You may not have heard about our struggles to have our rights as indigenous peoples recognized and for that, we are grateful to the NGOs for speaking on our behalf here and there. But today we speak for ourselves as we have noticed other NGOs who are threatening our livelihoods when they attack palm oil which we rely on heavily as a cash crop to enable us to enjoy the same standards of living as these NGOs.

”Our parents fought alongside the Australian and British soldiers to protect our lands. We remain always grateful to these countries for helping us to preserve our lands. We remain especially grateful to the United Kingdom for their guidance of the development of Sarawak. The palm oil tree which was introduced to Sarawak by the British government in the 1960s as a pathway towards self-sustenance has proven itself.

”As indigenous peoples of Borneo and farmers in the 21st century, we are now finally able to fend for ourselves on the lands our parents fought to protect alongside the Australian and British soldiers. Many of us grow rice, fruits and vegetables on our indigenous lands for survival and depend on the cash sales from palm oil fruits to buy what we cannot grow. Our palm oil trees empower us as indigenous peoples.

”We hope with this campaign, to deliver a message to those that are against palm oil, to tell these people that we are indigenous peoples and your discrimination against palm oil is hurting us.”

Note to Editors. DOPPA is a not-for-profit organization founded in 2015 to represent the indigenous palm oil farmers in Sarawak state, Malaysia. Based on data from the Malaysian Palm Oil Board (MPOB) which issues licenses and regulates to all palm oil production in Malaysia, there are 28,000 indigenous palm oil farmers out of the total of 36,000 registered smallholders in Sarawak state. Estimated acreage of palm oil farms cultivated by indigenous peoples in Sarawak state is under 100,000 hectares. Their harvests are an integral supply to the Malaysian palm oil production which is working towards national sustainability certification by 2020 under the Malaysian Sustainable Palm Oil (MSPO) scheme. The MPOB has allocated funds to assist smallholders by paying fully towards the costs of upgrading their farms to meet certification criteria.

DOPPA expects to register all Dayak smallholders and have them certified under the Malaysian Sustainable Palm Oil scheme (MSPO) by 2020. The driving force for the certification of all smallholders under the MSPO is the MSPO requirement to be certified or lose their license to grow palm oil. Palm oil production in Malaysia is heavily regulated by state and federal laws from all aspects including the planting of high yielding species to the employment standards of workers. These practices have been in place but is only now being documented to meet the demands for sustainability and traceability by buyer countries especially those from developed countries.

Photos included show Dayak palm oil farmers from Sarawak, Malaysia. These belong to the Iban tribes which form the majority of lowland tribes in Sarawak. The word “ak” in between names is the traditional way of naming Ibans to keep their lineage. Example: Ludai ak Manggat means Ludai, child of Manggat. 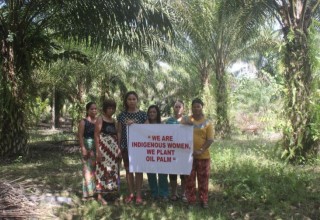 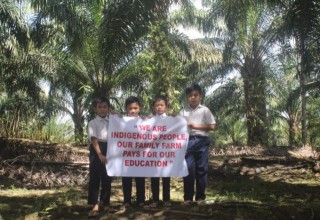 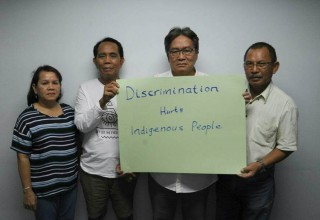 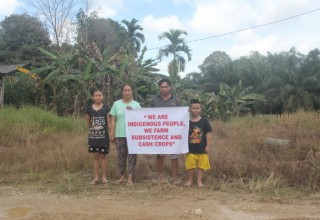 About Friends of the Orangutans