Ron Sherman is recognized by GUINNESS WORLD RECORDS for Most TV Commercials Produced in the World. Ron Sherman is the founder and President of Ron Sherman Advertising, the number one home improvement production company worldwide. 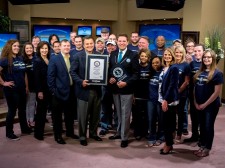 LITTLE ROCK, ARKANSAS, May 16, 2016 (Newswire.com) - TV personality, Ron Sherman was recognized by GUINNESS WORLD RECORDS for having produced the Most TV Commercials in the World. On May 3 at 10:45 AM Sherman was awarded a certificate confirming his GUINNESS WORLD RECORDS title by Michael Empric, an official GUINNESS WORLD RECORDS adjudicator who traveled from New York City to Little Rock for the event. The official ceremony took place at Sherman’s ad agency Ron Sherman Advertising (RSA) on the same set where Sherman had taped the record setting 3,503 commercials that have aired in over 100 markets in the U.S. and Canada. It was on this day that Ron Sherman went from ordinary to globally extraordinary.  Sherman was surrounded by some of the area’s top dignitaries, such as Little Rock Mayor Mark Stodola; Randy Zook, President of the Arkansas State Chamber of Commerce; Jay Chesshir, President & CEO of the Little Rock Regional Chamber of Commerce; Gary Hogan, Assistant Athletic Director University of Arkansas at Little Rock and Pulaski County Sheriff Doc Holladay.

After Empric presented Sherman his global accolade, Sherman thanked GUINNESS WORLD RECORDS and talked about how RSA’s unique style of direct response commercials ‘make the phones ring and generate millions in sales’ for home improvement clients across the country.  Sherman has found a niche in the home improvement industry and has turned his once boot-strapping production company into the number one home improvement production company in the world. RSA puts out more than 6,000 TV commercials a year and Sherman has personally taped 70,000 TV commercials in his 30-year career.  With offices in Little Rock and New York City, Ron Sherman oversees a team of about 30 employees which include a production department, post-production department, graphics department, web department, media buying team, along with accounting department. Ron Sherman (aka Steve Jumper) could not have had the success he has had without his CFO, Sheila Jumper (his wife), along with his two children, Dianna Stockdale and Ron Jumper, who oversee marketing and sales.

First of all, I want to thank the Guinness Book of World Records for this certificate. It means a lot to me and a lot to Ron Sherman Advertising and all our employees.

Sherman the son of a farmer said “Being recognized for this great global achievement really validates all the hard work that my team and I put into getting our clients commercials made and on the air.”

Ron Sherman Advertising specializes in Direct Response advertising and Lead Generation services for clients in virtually every market in the United States and Canada. Clients love us for our ability to "make the phone ring" and produce results.