Ripley's Believe It or Not! Turns 100 Today!

Believe It or Not!—A Phrase You Likely Hear Daily—Was Coined by the Man Who Created a Century Old (and Counting!) Legacy 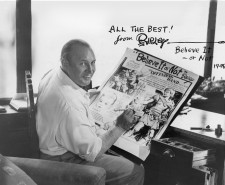 ORLANDO, Fla., December 19, 2018 (Newswire.com) - Ripley’s Believe It or Not! is celebrating its 100th anniversary. A centennial anniversary is an amazing milestone that few companies can say they have achieved.

Truth is stranger than fiction.

Ripley was famous for his world travels and regaling readers with tales of far-flung places. Ripley traveled to more than 200 countries in 35 years seeking the odd, the unusual, and the unexplained.

After roles at the San Francisco Bulletin and the San Francisco Chronicle, Ripley moved to New York, where the New York Globe sent him on a trip in 1913—announced with the headline, "RIPLEY IS OFF FOR EUROPE TODAY." Just a few years later, the first  Believe It or Not! cartoon was born.

Before becoming famous for drawing oddities from around the world in his daily Ripley's Believe It or Not! cartoon, Robert Ripley was hired as a sports cartoonist for a variety of newspapers.

In the early 1900s, photography wasn't used in newspapers the way it is today. Photography was expensive, and there was not an easy way to transfer photographs to print for mass production. Instead, newspapers employed cartoonists to draw reenactments of news stories and sporting events.

THE CARTOON THAT STARTED IT ALL

On Dec. 19, 1918, the cartoon that started it all was published. It was a slow sports news day, and with a lack of ready material, Ripley got the idea to pull together some previously drawn cartoons of unusual sports feats he had not published. He submitted it to his editors, and the rest, as they say, is history.

The cartoon ran with the title "Champs and Chumps." It wasn't until the publication of the next such cartoon that the famous title Believe It or Not! was first used. The cartoon became an instant sensation, and the newspaper was inundated with requests for more cartoons.

Ripley became so popular that he was once voted the most popular man in America and received an average of 3,000 letters per day ­­– that’s over a million letters a year!

The Believe It or Not! cartoon was not only a success, it also changed history…

On Nov. 3, 1929, Ripley published “America Has No National Anthem”—asserting “The Star-Spangled Banner” was nothing more than an unofficial hymn sung to an old English drinking song. It took 16 months for Congress to pass a one-sentence bill for President Herbert Hoover to sign into law America’s anthem.

Beyond print, Ripley also had an extensive career in broadcast, even earning his own star on the Hollywood Walk of Fame for radio. Believe it or not, he was the first to broadcast underwater, underground, and from the air.

Ripley’s cartoons were published in more than 360 newspapers around the world, translated into 17 languages, with a daily readership of 80 million people. Today, Believe It or Not! is still in print and holds the title of the World’s Longest Running Syndicated Cartoon and can be found daily on Ripleys.com.

Today, Ripley’s Believe It or Not! has evolved into a global family entertainment company with over 100 attractions in ten countries, and have robust media, entertainment, publishing, and licensing divisions.

To commemorate their anniversary, Ripley’s Believe It or Not! is celebrating their 100th anniversary with $100 bills! On Dec. 19, 2018, the celebration includes:

Details can be found at ripleys.com/100.

Tags: anniversary, cartoons, riley's believe it or not, robert ripley 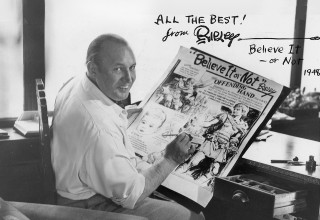 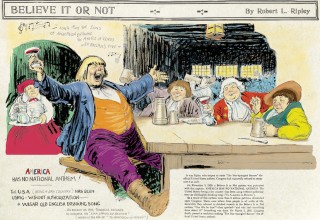 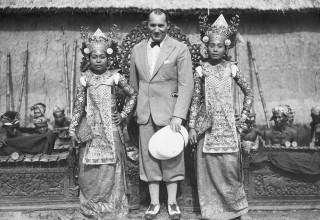 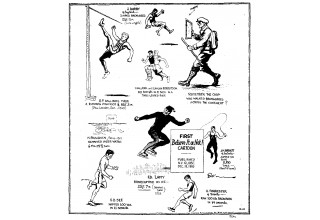