"The students at Cora Howe have needed this fence on their playground for many years," said K.C. Winfrey, Principal, Cora Howe School 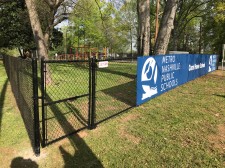 Cora Howe School is a special day school for those students whose learning differences are so significant that they cannot effectively learn within the context of a less restrictive environment. It serves Metro Nashville Public Schools students grades K-12 who are referred through the Individualized Education Plan Team.

“Our annual Good Friday Service Project allows our team the opportunity to serve others in the Nashville community uniquely through the gift of a commercial fence installation,“ said Derek Smith, Rio Grande Fence Co.’s Chief Operating Officer and third-generation owner. "We enjoyed hearing the story of Cora Howe School and how the staff is impacting our community by enriching the lives of these students.”

All 44 of Rio Grande Fence Company’s employees participated, contributing 202 total service hours over three days of material and site preparation leading up to the completion of the project on Good Friday.

In addition to the 494-foot fence, the recess area also received a 50-foot long piece of royal blue fence screen custom-ordered with Metro Metro Nashville Public Schools and Cora Howe School logos. The recess area had no visible signage prior to this.

“We, at Cora Howe, are so humbled and appreciative of the fence installed by Rio Grande Fence Company as part of their Good Friday Project this year,” said K.C. Winfrey, Principal, Cora Howe School. “The students at Cora Howe have needed this fence on their playground for many years. This beautiful, new fence will keep our kids safe while they are enjoying the playground. The logo banner provided by Rio Grande was an added surprise that will help us brand and highlight our school to the East Nashville neighborhood.”

“On behalf of Metro Nashville Public Schools I want to thank Rio Grande Fence Co. for their efforts on their Good Friday Service Project at Cora Howe School. It’s a great day and great job by Rio Grande,” said Dennis Neal, MNPS Executive Director - Facilities & Grounds Maintenance. ”It’s going to help the school tremendously in their mission of serving the needs of their students.”

To choose this year’s project, Rio Grande reached out to the Middle Tennessee community via email and social media channels for suggestions of worthy causes.

“While going through this year’s submissions, the Cora Howe School proposal stood out as the most worthy,” Smith said. “It serves an exceptional school with a diverse student body from all over Nashville who have specific educational and recreational needs tailored by MNPS experts exclusively for each student. Cora Howe School now has a fully enclosed recess area for its students and staff to enjoy.”

Photos and videos of Rio Grande Fence Co.’s 2017 Good Friday Service Project are available for free and unrestricted media use at https://rgfence.box.com/v/PressRelease041817

Since 1958 Rio Grande Fence Co. of Nashville, The Commercial Fence Professionals™, has been installing and repairing fence for commercial and industrial projects in the Mid-South region.