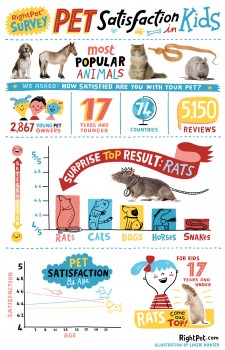 SANTA BARBARA, Calif., October 16, 2018 (Newswire.com) - According to a new international survey conducted by RightPet, children and teens say they get more satisfaction owning rats than any other pets. Not the wild rats seen around garbage dumpsters, but domesticated “fancy rats” which have different colors and fur types.

The RightPet Pet Ownership Study was conducted online between 2010-2018 and was designed and performed by researchers with Ph.D.s in psychology.

The study finding is based on 5,150 reviews from 2,867 members from 74 countries, who currently own, or have owned, pets when they were 17 years old or younger. Adults and kids who owned animals between the ages of 10-17 reported that pet rats gave them more satisfaction than any other types of pets, including cats and dogs.

Why rats? A close look at the user reviews reveals these reasons:

“It’s easy to see why kids and teens love pet rats,” says Brett Hodges, owner/editor at RightPet. “They’re smart and affectionate little clowns who bond with their owners and thrive on social interaction. And perhaps the most intriguing explanation has to do with developmental psychology. Small pets like rats are often the first living creatures (not counting goldfish) a young person considers to be their very own, and successfully meeting the challenge of raising a pet can do wonders for self-esteem."

It’s the pet/owner relationship that young rat fans love most, saying that female rats tend to be more outgoing, playful and hygienic, and that male rats are more loving and cuddly.

“My favorite thing to do after getting home from school would be to take her out and carry her on my shoulder; she would stay put there and nuzzle into my neck and hair. Owning a rat reminded me of having a miniature dog, as they can be just as loyal and loving,” shared RightPet member hayleaoryan.

Part of the appeal of pet rats to children and teens also seems to be the inevitable look of horror on their parents' faces when they say they want a rat.

“For pre-teens and teens, pet rats have an aura of ‘creepy cute,’ and it can be appealing to have a pet that others find scary or strange,” says Gail F. Melson, Professor Emerita at the Department of Human Development and Family Studies at Purdue University. “Adults probably associate fancy rats with the stereotyped dirty and disease-spreading wild rat. The association is unwarranted, but if I were a teen, I might enjoy having a pet that freaks out my parents.”

Unfortunately, owning a pet rat does have a few drawbacks. Rats have short lifespans of only 2-3 years, and many kids say the death of their pet rat is their first experience with mortality. Rats can also be noisy at night, like to chew and need their cage cleaned at least several times a week to reduce urine smells.

The appeal of rats, according to the RightPet survey, tends to wane in favor of cats, dogs and horses in the over-18 age group, but rats still remain the No. 4 most satisfying pet until age 30.

RightPet is the world’s largest online pet healthcare rating and recommendation site. With over one million breed- and species-specific reviews by vets, trainers and pet owners, RightPet harnesses consumer and expert experiences and presents it in a user-friendly, digestible way so pet owners can find the most effective - and cost-effective - options for an encyclopedic list of pet health, wellness and training issues.