Because they're very, very good dogs 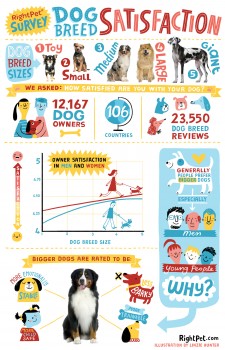 SANTA BARBARA, Calif., October 9, 2018 (Newswire.com) - According to a new international survey from RightPet, dog owners say they get more satisfaction owning large dogs than small dogs. This preference is especially true for men and young people.

Why are dog owners happier with large dogs than small dogs? The RightPet study found a direct correlation between dog size satisfaction and the fact that dog owners rate bigger dogs as more emotionally stable, child-safe, trainable and less-barky than small dogs.

“What our study has found is that large dogs score higher in traits that are really important to most dog owners”, says Brett Hodges, owner/editor at RightPet. “People don't prefer large dogs per se – they like them because, in general, they're more even-tempered, trainable and quiet than small dogs - making them 'best in home.’”

RightPet is the world’s largest online pet healthcare rating and recommendation site. With over one million breed- and species-specific reviews by vets, trainers and pet owners, RightPet harnesses consumer and expert experiences and presents it in a user-friendly, digestible way so pet owners can find the most effective - and cost-effective - options for an encyclopedic list of pet health, wellness and training issues.