What Can Growth Hormone Therapy Do for You? Richard Rodriguez, Celebrity Fitness Trainer, Discusses the Benefits of Somatropin HGH Therapy. 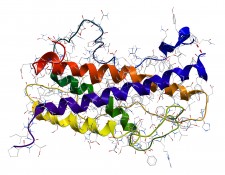 The growth hormone (GH) is responsible for slowing the aging process, which can aid exponentially in a bodybuilding regimen. As people get older, the growth hormone naturally starts to decline in their bodies. After 30, the hormone declines about 25 percent every ten years. This means that when you’re 60, you have 25 percent of the original levels.

The pituitary gland naturally produces the growth hormone, and it stimulates cell reproduction and growth in the body. It also helps to regulate body fluids, body composition, sugar and fat metabolism and muscle and bone growth, and it may also help with heart function. Growth hormone therapy can slow down the aging process, and this synthetic hormone was first developed in 1985 and is approved by the FDA.

Somatropin is the isolated form of human growth hormone (HGH). The hormone was first discovered in the 1920s and was isolated in 1956, when research on its function in humans began. Regardless of its form, we still typically refer to somatropin as human growth hormone, growth hormone, GH, HGH ... it's all the same. Somatropin HGH was originally harvested from the pituitary glands of cadavers. This process continued up until the 1980s, when the practice was banned due to numerous cases of Creutzfeldt–Jakob disease (mad cow disease) and central nervous system lymphomas that were reported with its use and traced back to contaminated batches of somatropin harvested from human cadavers with those diseases. Subsequently, bio-tech giant Genentech, and drug company Eli Lilly, employed recombinant DNA technology to fabricate a bio synthetic version of growth hormone that was FDA approved in 1987. Their products were an exact DNA match to the 191 amino acids chain somatropin produced by the human body.

Over the years, the benefits of somatropin were well reported and quite varied. To this day, new research regularly comes to light that demonstrates new benefits and uses for somatropin. For those reading this, the majority interest lies in somatropin's positive effect on:

In the body, somatropin, the natural form of human growth hormone, is produced when the hypothalamus stimulates the anterior pituitary gland – just like luteinizing hormone stimulates the testes to produce testosterone. The effects of somatropin on the human body are as varied as they are desirable. Somatropin promotes and enhances protein synthesis in muscle tissue to effect growth, recovery and repair. Somatropin is directly involved in building new muscle. Research also demonstrates somatropin is involved in metabolizing body fat (lipolysis) and the oxidation process which turns fat into energy. Somatropin also improves sleep patterns, making for deeper, more restful sleep and more time in the REM sate of sleep — where growth, recovery and tissue repair are the most efficient. Accordingly, employing somatropin is one of the standard means by which pro bodybuilders have increased and maintained muscle mass while dieting for years.

Clearly, somatropin represents numerous benefits to the athlete. Research demonstrates that somatropin may even be superior to testosterone and its steroid derivatives, because it has a paucity of side effects in limited doses, does not aromatize or convert to estrogen and it's not androgenic and thus causes no androgenic side effects. In combination with testosterone, athletes have the absolute best of both worlds.

Since somatropin is a critical hormone for the health and well-being of all humans, not just athletes, the dosing of somatropin growth hormone must be fairly precise for the optimal functioning of the various physiological processes of growth and repair of body tissues — including muscle — and the metabolization of body fat. Not only is the dosing of somatotropin important, so is the time of day you take it. As with all things we employ to enhance performance, or quality of life, we continually strive for what is generally accepted as “optimal.” In the case of Somatropin, “optimal” is a fairly simple application.

As with most cases of “off-label” uses of compounds, it is the athletes looking to increase performance who end up being the de facto lab rats in the case, because the medical community at large tends to ignore non-medical uses of any compound, somatropin included. The bodybuilding community has taught us, over years and years of trail and error, that the maximum dose of somatropin should never exceed 8 IU (International Units) a day. That's not to say that some extreme practitioners haven't gone as high as 24 IU a day. The resulting bloat because of the water retention caused by such an extreme dose was about the only noticeable difference between such a high dose and what the athletic community would deem normal — 4 to 8 IU a day. If nothing else, this goes to prove the rather innocuous nature of somatropin. You really can't overdose on it and experience any significant health risk — not short-term, anyway. A long-term study on such unreasonable dosing would be as unethical, as it would be cost-prohibitive. However, suffice to say, based on what we do know today, somatropin, at any dose is a relatively safe drug. That's not say that there is such a thing as a safe drug, but as far as the multitudes of substances we routinely put into our bodies — even items purchased over-the-counter — comparatively speaking, somatropin is perhaps the least problematic of them all.

So what is the optimal dose of somatropin one should take to realize its maximum benefits, with the least water retention? Again, this was determined by trial and error among the athletic community. While the published studies on growth hormone rarely exceed 2 IU per day, athletes have been performing increasingly well on 4 to 8 IU per day, as depicted above. However, through the quasi-scientific, empirical, process of trial and error among athletes, we've learned that in order to reap the full benefit of somatropin, the timing and consistency is more important than the total amount taken. For example, through the cause and effect monitoring of athletes using somatropin, we know today that consuming a 100 IU box of somatropin over 20 days at 4 IU a day is more beneficial than taking the same 100 IU over a period of 10 days, at 8 IU a day. Additionally, we now know that somatropin taken in conjunction with testosterone is the most effective manner of use.

We know this because research in animals has demonstrated that somatropin, like testosterone, seems to divert the calories from food away from fat synthesis and toward protein synthesis, to the degree that somatropin is noted to be as powerful as testosterone in stimulating protein synthesis and nitrogen retention in muscle. We see this as proof in humans, based on the observation that those who are clinically GH and testosterone deficient, have reduced lean body mass and increased fat mass, particularly central abdominal fat. Conversely, the opposite is true. This gives us an empirical perspective as demonstrating that the higher the level of somatropin, concomitant with testosterone, the body synthesizes more muscle mass and less fat than with either compound alone. Male test subjects taking between 250 and 500 mg of testosterone a week, in conjunction with 4 to 8 IU of somatropin daily, noted extremely satisfactory increases in lean mass while shedding body fat, especially in the abdominal area.

Within 15 to 20 minutes after a subcutaneous (sub-Q) injection, somatropin blood concentrations immediately fall off. This is because the body does not use somatropin growth hormone in its original state. It must be converted in the liver to somatomedin-C, or IGF-1. IGF-1 is a 70-amino acid chain hormone that has been shown to be the most potent growth factor derived by GH release or administration. It is the hormone that “turns on” the processes of tissue growth and repair, especially in muscle. IGF-1 production is regulated by factors other than somatotropin growth hormone, most notably nutritional and thyroid function; however, when growth hormone is released by the body, or injected as somatropin, and it goes to the liver to stimulate a set of growth factors, IGF-1 has demonstrated to be the most potent and well-established of all.

The timing aspect of all of this revolves around insulin. This hormone works completely against somatropin HGH. While insulin can be highly anabolic, insulin, in the presence of somatropin growth hormone, renders both ineffective. They essentially cancel each other out. Regulating these hormones is a kind of natural balancing act the body goes through. Lower insulin levels can cause the body to produce more pituitary growth hormone. Therefore, somatropin is the most effective when insulin levels in the body are at their lowest.

Using blood sugar as an indicator, what is the best time to take somatropin?

Before You Decide To Use Somatropin, Consult Your Doctor

You should not use somatropin if you are either allergic to it, or if you currently suffer from complications from recent surgery, or other serious complications such as:

Such conditions can become worsened with somatropin. It is important to seek medical counsel before embarking on any therapy which includes somatropin or other hormones affecting tissue growth.

In clinical studies with somatropin growth hormone, some individuals experienced:

The availability is quickly filling up with athletes he will be working with, so if you are interested now, schedule your Free 30 Minute Consultation Now or Fill out an application for consideration.

Richard Rodriguez with over 25 years experience is an iconic and legendary figure within the fitness community. His companies span all across the globe and has dominated the peptides, transdermal, hormone and contest prep market.

IAG Miami Richard Rodriguez, Celebrity Trainer, Talks About How to Confirm the Validity of a Product You Buy
RR Ventures LLC - Jun 9, 2017