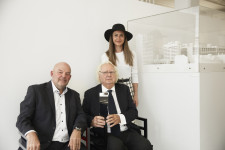 "Richard Meier has created a body of work that still excites and inspires young architects today", said architect and award founder Jürgen Grossmann. "His Museum Frieder Burda in Baden-Baden is proof that good architecture is not focused on steel, glass or concrete but on light, space and effect."

"The Museum Frieder Burda is still very special to me today", Mr Meier said in his Manhattan office after accepting the award. "I remember an extraordinary client and the great challenge of realizing this project in the middle of Baden-Baden's central park."

He also revealed why he has always enjoyed building in Germany. "There's a special appreciation for architecture in Germany which you can hardly find anywhere else in the world."

Mr Meier went on to sum up his vision of good architecture. "It's about giving something back to people. The site, the environment, the nature, the location - all of that plays a role. But the most important thing is how the building affects the people who encounter it."

Mr Meier's architectural signature is shaped by the development of the Bauhaus style from the 1920s.

Almost all of the buildings designed by him adhere to this style.

They are characterized by their white color, strict geometric shapes and light-filled interiors.

Behind this is Mr Meier's mantra: "The most important thing is light. Light is life."

Mr Meier's design for the Museum Frieder Burda in Baden-Baden, which opened in October 2004, also reflects his signature style.

Together with a local German architect, he created a light, open building with two large halls, two cabinet rooms and a basement. The three floors are accessed via ramps.

In his almost 60-year career, Mr Meier has received the Pritzker Prize, known as the Nobel Prize for architecture, the Compasso d'Oro and the Honor Award of the American Institute of Architects for the Museum Frieder Burda.

He holds two honorary doctorates, and even today, at the age of 87, he still designs and creates new things every day.

The BADAP is an independent award open to all those who create and are interested in architecture.

Works and buildings can be nominated in 12 categories until May 15.

The winners will be announced at a big ceremony at the European Forum on the Rhine, near the French-German border, on October 15.