The image of women, now in their 70s, side-by-side with fists raised in message of equal rights, resonates with power for a new generation 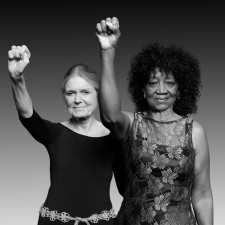 ST. AUGUSTINE, Fla., October 17, 2017 (Newswire.com) - A re-enacted photographic portrait of Gloria Steinem and Dorothy Pitman Hughes in their iconic 1971 “raised fists” stance taken by St. Augustine photographer Daniel Bagan, added this month to the Smithsonian National Portrait Gallery collection, gives new life to the significance and power of their historic statement of equal rights for women and blacks. More than 45 years since the original Dan Wynn image appeared in Esquire magazine, their message has not dimmed with age.

The portrait will be displayed in the Museum of the City of New York’s exhibition Beyond Suffrage: A Century of New York Women in Politics, which opened on Oct. 10, 2017. It was unveiled on Oct. 9 at the Thomas G. Carpenter Library at the University of North Florida in Jacksonville, Florida, where Pitman Hughes lives and continues her activism.

The symbolism of a black and white woman standing together, demonstrating the black power salute is as important now as it was in the 70s.

For Pitman Hughes and Steinem, the new portrait featuring the defiant black power salute again helps open up a dialogue on sexism and racism that is still vitally needed today, while demonstrating their continued hope for positive change.

“We must have difficult conversations, and it’s also important to talk about the learning, growing, friendship and joy that come from having them,” said Steinem. “So it’s important to say that in real life, neither Dorothy nor I would give up — or be the same without — our near half-century of shared hopes, differences, laughter, and friendship.”

The partnership between Steinem and Pitman Hughes began in the early 1970s as the pair took to the podium to discuss the importance of intersectional feminism. Together they founded Ms. Magazine and the Women’s Action Alliance. Decades later, the impact of their partnership has not waned. Steinem and Pitman Hughes remain an inspiration to activists across the country as they continue to push for racial and gender equality.

“The symbolism of a black and white woman standing together, demonstrating the black power salute is as important now as it was in the 70s,” said Pitman Hughes. “A hundred years of the suffrage movement has not eliminated racism, classism and sexism. Black women and white women can make this change together, but not until we acknowledge and resolve the racism problem that stands between us.”

They have struck their side-by-side, raised fists pose many times over the years. But this new portrait’s photographer, Daniel Bagan said the moment was right to re-capture their symbolism.

“The women were dynamically engaged in their iconic stance, and the result was inspiring,” said Bagan. “Even decades later, their power and beauty show no sign of age, just wisdom reflected in their soft smiles.”

Bagan, based in St. Augustine, Florida, has also launched the “Age of Beauty Project” creating portraits of women between the ages of 50-100. The new Steinem-Pitman Hughes portrait inspired the project, and he shares the proceeds from the sale of their image in support of Pitman Hughes’ continued activism. The project will produce a book titled “Age Of Beauty,” a social commentary on beauty and age. Bagan speaks with women over 50 almost every day, and many say they feel invisible, that they no longer see themselves as beautiful. Bagan hopes the exhibition of his portraits shows that real beauty transcends Madison Avenue’s definition of thin, smooth and young. To learn more and see his work, including acquiring prints of the Steinem-Pitman Hughes portrait, visit: http://www.bagan.photography. 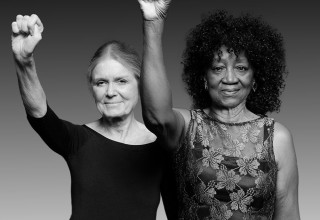 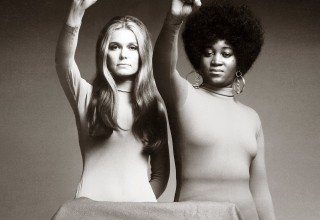 Since 1994, Vanguard Communications has provided specialty healthcare marketing with a strategy focused on patient education.