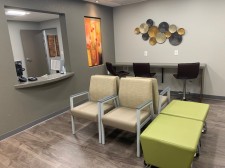 “We are so excited to have a presence in the growing Oakland/Berkeley market in a premier medical arts building with the addition of a new female physician to serve the community,” says Sheldon B. Josephs, FACHE, executive director at Reproductive Science Center of the San Francisco Bay Area. “After many years of patients asking, RSC’s best-of-class services have finally arrived!”

The new clinic offers convenience to patients who live in the Oakland and Berkeley areas as well as to those who commute between San Francisco and the East Bay for work. It also presents improved access, an updated interior and larger office space while offering the monitoring services Orinda patients have come to rely on. Drs. Evan Rosenbluth and Laura Eisman will serve the Oakland location, which accepts all major insurances.

This state-of-the-art, brand-new buildout allows for additional rooms, two medical doctors and a full-time mid-level provider. The office will be open Monday through Friday from 7 a.m. to 5 p.m. New patients and former Orinda patients can contact the Oakland office by calling 1-888-377-4483.

Established in 1983, two years after the first successful birth through in vitro fertilization (IVF) in the U.S., Reproductive Science Center of the San Francisco Bay Area has been a pioneering fertility medical practice. RSC was responsible for the nation’s second successful birth of a baby from a frozen embryo and is recognized today for its pregnancy rates and work with egg donors and egg donation for patients from Northern California, the Western United States, Asia, India and around the world for patients pursuing medical tourism. www.rscbayarea.com

Since 1994, Vanguard Communications has provided specialty healthcare marketing with a strategy focused on patient education.