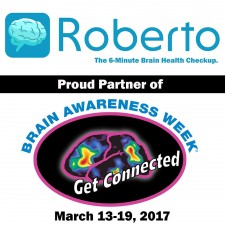 Coraopolis, PA, March 9, 2017 (Newswire.com) - RC21X is celebrating Brain Awareness Week by making its new brain performance monitoring app Roberto available as a free download via the App Store, GooglePlay and Amazon or at www.robertoapp.com. This groundbreaking app takes about 6 minutes to complete and provides trending reports that can be shared with family members, physicians, coaches, trainers and more.

Brain Awareness Week (BAW), March 13-19, is global celebration of the brain organized by the New York City-based Dana Foundation. Every March, BAW unites the efforts of partner organizations worldwide in a celebration of the brain for people of all ages. Activities are limited only by the organizers’ imaginations and include open days at neuroscience labs; exhibitions about the brain; lectures on brain-related topics; social media campaigns; displays at libraries and community centers; classroom workshops; and more.

"Our goal is to make 2017 the Year of Brain Health and think the Roberto app can play an important role in making that happen."

“Brain health is a growing concern, and we’re proud to be a partner of the Dana Foundation in getting the word out about the brain,” said RC21X CEO Clarence Carlos.  “We need to do all we can to highlight the research going on, from Alzheimer’s Disease and dementia, to important new insights on how lifestyle changes can drive better brain performance. That was the driving force behind our Roberto app.”

The Roberto application is based on RC21X’s desktop monitoring platform and is named for baseball legend and humanitarian Roberto Clemente. Users play a series of video games that stress different parts of the brain. RC21X and Roberto are web-based versions of pen-and-paper tests that have been used for decades to monitor neurocognitive and neuro-motor performance. Each session produces a unique profile—a set of scores that provides objective data on brain performance. Users can monitor the effects of those changes in real time, allowing the opportunity to have more meaningful conversations with healthcare providers if their performance shows a downward trend.

Roberto was released in February and was recently recognized by PhoneDog.com, an industry website with 650,000 followers, as one of the Top 10 New iOS Apps.

The company suggests a three-step approach to using the app. First, users practice playing two sessions to get a feel for the modules. Then they establish their “normal range” by playing four game sessions. This creates the users’ Brain Performance Profile—objective data about their personal performance rather than a comparison to similar population groups. As users continue to take Roberto sessions they can spot trends and be proactive in their brain health. They can also monitor the effects of lifestyle changes like exercise programs, diets and new medications. If users have questions about the results, they can visit one of 1,600 NovaCare Physical Therapy facilities nationwide.

RC21X is actively looking to partner with organizations like the Dana Foundation that are engaged in promoting brain health. “We want to make this app available for free to get it into as many hands as possible,” says CEO Carlos. “Our goal is to make 2017 the Year of Brain Health and think the Roberto app can play an important role in making that happen.”

About the Roberto App

Roberto is the new application, powered by RC21X. The app allows users to monitor their brain performance in about 6 minutes. Roberto is a digital version of tabletop and pen-and-paper tests that have been used for more than 50 years. Each session produces a unique Brain Performance Profile along with trending reports that allow the user to track their progress.

The company that created the test—Coraopolis, PA-based RC21X (named after Roberto Clemente)—teamed with the Human Performance Institute at the University of Texas at Arlington. Incorporating science and scoring algorithms from Dr. George Kondraske, the team put together a tool that gives objective data in real-time about how well your brain is performing.

·         Each session produces a unique Brain Performance Profile, and after a few sessions you’ll know what is normal for you. From there you can actively monitor your performance

·         New log feature enables you to add notes to your sessions

About The Dana Foundation

The Dana Foundation is committed to advancing brain research and to educating the public in a responsible manner about the potential of research. The private philanthropic organization supports brain research through grants, publications and educational programs. Each March it organizes Brain Awareness Week which unites the efforts of universities, hospitals, patient advocacy groups, professional associations, government agencies, service organizations and K-12 schools around the world in a week-long celebration of the brain.

About Home Base Impairment Co. / RC21X

We've developed innovative brain performance monitoring services for the B2B and B2C markets. Our services are provided either in a clinical setting or via a self-administered portal in the comfort of a home.