Raptors Along the Rails 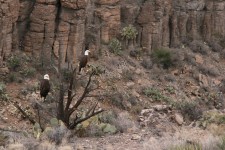 CLARKDALE, Ariz., October 23, 2017 (Newswire.com) - When traveling aboard Verde Canyon Railroad, passengers peer up at the red rock pinnacles towering over the precious Verde River, awe-struck by the canyon walls reaching ever higher into the clear blue skies above. Changing their gaze downward and across the expanse of the canyon, everyone marvels at the wild Verde River as it meanders along the tracks. What humans don’t realize is the enormous importance this Canyon area holds for the American Bald Eagle. The Verde Valley is ideal eagle habitat in Arizona’s wild backcountry. Year-round resident raptors are joined every year from November through March by migratory feathered visitors for a wild winter respite along the cliffs of the Verde River. Where train passengers see scenic vistas and a bold medley of greens, blues, reds and golds, these magnificent flying creatures see a river teeming with food, ancient trees and dramatic canyon clefts in which to secure nests, and a big sky for their aerial adventures.

Arizona’s riparian areas are crucial habitat for raptors that depend on the river for sustenance. With their keen eyes, they fish the waters of the Verde and build legacies along its remote and protected banks. Winter is the best time to catch a glimpse of our nation’s symbol in all its glory, soaring along the train. Nests are built in preparation for the eggs that generally arrive in late January. Eaglets appear in late February or early March, watched over by ever-vigilant parents who demonstrate the meaning of the phrase “eagle-eyed.”

Longtime supporters of Arizona Game and Fish’s “Eagle Watch” program, Verde Canyon Railroad contributes toward the sustainability of the dedicated men and women who camp out near active nests, monitoring the eaglets and watching for dangers. In fact, it was AZGF Eagle Watchers who saved the life of Sonora, an educational eagle now a popular resident of Liberty Wildlife in Phoenix. Sonora was spotted as she fell from her nest along the Lower Verde River near Phoenix a dozen years ago. She was nearly killed when Africanized Bees attacked her and a sibling who unfortunately did not survive. Sonora sustained permanent injuries to an eye and a wing that made her unable to be returned to the wild, though through Liberty’s educational programs she has been able to ride the rails along the Verde River for almost 10 years now. Just as much as the train passengers enjoy seeing a bald eagle close up, it seems Sonora is also enriched by her visits to this raptor paradise. Since 2010 Liberty Wildlife has had a fruitful partnership with Verde Canyon Railroad, regularly sharing educational raptors and reptiles with guests aboard the train and at the depot.

With open-air cars accessible to the full sights, sounds and scents of the wilderness, Verde Canyon Railroad provides an ideal platform for wildlife viewing year-round. Real rails, real people and a real adventure make Verde Canyon Railroad a feast for each of the senses. The historic rail line was once a treasured connection between the booming copper mines of Jerome and distant civilization. Today, two million passengers later, the train continues to rumble into this same, untouched terrain where resident raptors soar from the edges of deep red cliffs, and the perennially-flowing water of the Verde River weaves its wondrous path through the high desert.

It’s Always a Great Day When You Are on A Train! 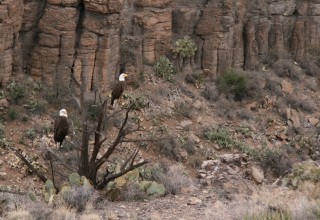 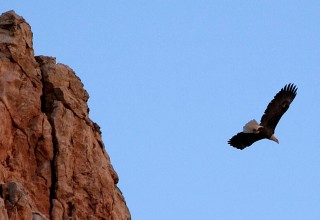 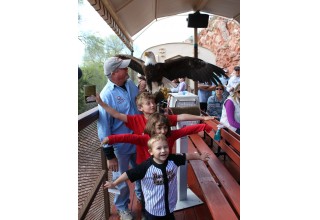 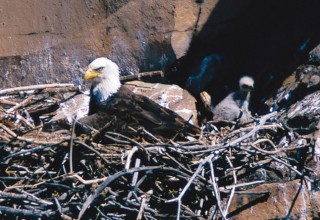