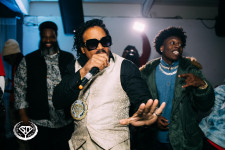 JACKSONVILLE, Fla., November 13, 2020 (Newswire.com) - ​Sheldon Davis, most notably known as Natalac, is currently working on a new album, titled "Love & Pimp Hop." The rapper broke the story recently, and the Natalac-fandom is avidly watching the space for new singles, teasers, or exclusive content from the album.

Davis adopted the stage name after he spun his music career, having explored his passion for rap music. Natalac primarily is an entrepreneur who has a logistic business with 18 wheeler trucks. He started in the late 90s, driving a single truck to owning, managing and operating round the clock in a successful logistics business called "Natalac Express."

Apart from his trucking company, the American rapper is also looking to establish himself in the realm of music production, having founded "Natalac Records," which is the parent company overseeing production and publishing of his exclusive music.

Being a rapper and managing a business with overarching responsibilities and business commitments, Natalac pioneers the American Dream, being a hardworking man who rose from rags to riches, founding an empire that continues to hit major headlines across the country.

The African-American rapper and entrepreneur spent the past 25 years establishing his trucking business and a music career. He also has United States Military Service under his belt and being an ardent patriot, he embodies the success and representation of a true American who never backed down.

His noteworthy records include 'Pimp of the City' and 'Step Daddy', which highlight his music career. On Feb. 19, 2018, Natalac was trending on the occasion of President's Day, having released 'Pimp of the Nation'; his fans applauded Natalac's singles with Sean Paul To Mi Thing, Bankroll Jonez Project Pat Me and U, La Chat Rachett Misses and The Last Mr. Bigg Hoe Check II.

The news of a new album 'Love & Pimp Hop' has excited his fans and the rapping community, waiting for what Natalac is set to bring on the table this time around.