Quinn & the Quips is the story of Quinn, an introverted gamer thrust into the limelight as the superstar for her middle school's eSports team. She must navigate new complicated social relationships, guide her team to the championships, and of course, make good grades. Quinn and her team play QuipsQuest, a multiplayer game where teams are given timed challenges in a VR world. Loyal fans can watch the QuipsQuest VR action on gymnasium screens as the eSports team physically tackles the game's challenges on the gym floor.

"The competition was stiff and we were glad to see that Quinn is prepared to compete at the highest level."

Hundreds of shows from around the world entered to compete for the Pitch THIS! grand prize, a development deal with Nelvana Studios in Toronto, Canada. Quinn & the Quips was the only semi-finalist from the U.S.  Other semi-finalists hailed from South Africa, China, Ukraine, Chile, Israel and four from Canada.

Toni Steedman, head of Blue Socks Media, and Alex Anderson, a producer at Blue Socks and the creator of the original Quinn & the Quips concept, presented the show’s treatment to the judges on Wednesday, September 20th, and the grand prize winner was announced the next day.

“While I manned the podium, Alex dressed as our heroine, Quinn, and introduced Grapevine Middle School’s eSports team and supporting cast with a projected Powerpoint presentation, “ Steedman explained. “It was also great fun as Alex demonstrated eSports moves while wearing a virtual reality headset!”

The grand prize was awarded to a Canadian series called “Somnius,” the story of Aria, a young girl who follows in her lost mother’s footsteps on a pilgrimage across the galaxy in search of clues to a hidden mystical power. “The competition was stiff and we were glad to see that Quinn is prepared to compete at the highest level,” Steedman added. Over the next few months, the Blue Socks team will evolve the series as it works to secure development partners. The Blue Socks Quinn & the Quips team includes Steedman, Anderson, well-known illustrator Warner McGee, and accomplished Canadian screenwriter, Heather Jackson.

For more information about Quinn & the Quips, go to: BlueSocksMedia.com 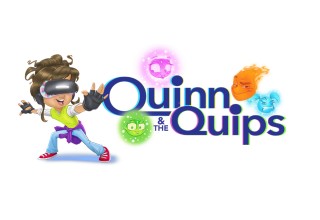 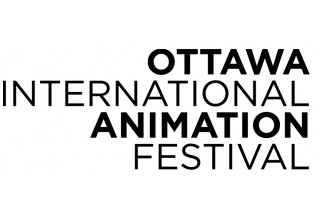 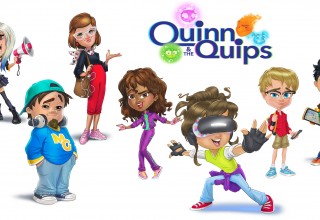