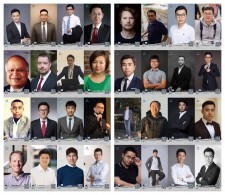 NEW YORK, June 13, 2018 (Newswire.com) - QuarkChain recently got listed on Binance under a debut arrangement. Thanks to their incredible investors and advisers, QuarkChain was able to reach this crucial milestone.

QuarkChain’s community is quite international, so as QuarkChain’s institutional investors. They have carefully reviewed the code on GitHub and tested the demo again and again before deciding to invest. As a strong team comprised of professors and engineers with extensive experience in large distributed systems at big companies including Google, Facebook, and Uber, QuarkChain drew a lot of interest from investors all over the world. After careful consideration of the overall strategy, the team finally decided to partner with these institutional investors to venture into “the new public blockchain ecosystem”, which aims to support real business applications.

QuarkChain really appreciates all of the investors and advisers who’ve provided their support.

Advisors (In no particular order):

Mike Millers  Ph.D. in Physics with 100+ publications; Founder of Cloudant (YCS08), which was acquired by IBM Cloud Data Services in 2014

Investors (In no particular order):

The following are quotes from some of QuarkChain’s investors and advisers.

“I believe that more scalable blockchains are needed and the team behind QuarkChain has experience working in successful legacy tech firms and performing sharding.”

“The engineers behind QuarkChain are some of the best I’ve ever worked with. Their knowledge and experience in delivering extreme performance distributed systems give them a unique advantage in developing a blockchain that can handle millions of transactions per second.”

“I like this project because it aims to solve an important problem in the blockchain world: ‘Low Throughput’. This problem is limiting the application potential of blockchain technology. QuarkChain’s team has a very solid background in high-performance systems and I think they can find an optimized solution soon.”

“We will help the project to build their ecosystem in Korea by providing our insights and networks.”

“What I like about QuarkChain is they are focused on solving the scalability trilemna (scalability, decentralization, and security).  I believe this is where the focus should be for the current generation of blockchains.  The team released a testnet and also organized a modest raise that was less than they could have asked for and signals their focus in solving the problem they are seeking to address.”

“Investing in QuarkChain is a long term bet on a team that combines amazing technical expertise with actual production experience. When we looked across the market we saw QuarkChain had the best combination of those two skills.”

“As a traditional VC/PE and a long-term investor, we support the most ambitious founders with the entire ecosystem, in order to foster the adoption of blockchain technologies. Therefore we conduct thorough due diligence of projects we invest into. During our interactions with QuarkChain, we were impressed by both the results of the testnet implementation and the quality of the team. Our questions were answered immediately with required level of detail - which built a high level of trust that the QuarkChain team can deliver on its promises. We are excited to partner with the QuarkChain team and help with adoption in European region.”

Thomas Graham from TLDR -  Global Investment and Advisory Firm that Specialises in Tokenisation:

“My first company that originated at MIT builds the fastest database in the world by using GPU in-memory processing and sharding across distributed nodes. It was very exciting to me to see a project that was achieving the super fast performance by using a familiar database concept, shading, in an innovative way!”

“The innovative mechanism of main chain and subchain sharding not only increased TPS, but also gives subchain flexibility in consensus mechanism and blockchain features. I think QuarkChain should focus on adaptive subchain insertion mechanism. As the first main chain running in DApp, Bodhi will collaborate with QuarkChain to talk about challenges and breakthroughs in scalability based on intelligent contracts.”

QuarkChain has made huge progress in its long-term project.