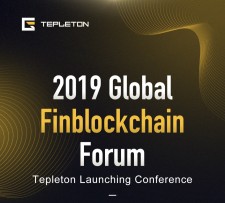 NEW YORK, August 26, 2019 (Newswire.com) - ​​​​​​​The Global Finblockchain Forum & Tepleton Launching Conference will be held at the Pan Pacific Hotel in Singapore on Sept. 2, 2019 (13:00 p.m.-18:00 p.m. local time in Singapore). Tepleton Foundation powers the conference and is co-organized by Jinse Finance, Singapore BPlus and FulLuck. The conference will witness the complete view of Tepleton’s technology, economics and ecosystem. Tepleton’s CEO, CTO, and other executives will give enlightening speeches on blockchain finance. Many professionals and experts from all walks of life are invited to join this feast. For example, Keth Carter, the professor at the National University of Singapore, one of the most well-known universities in the world, will attend the conference as a special guest. The executives from Chuangshi Capital, LinkVC, Huobi and Biki are also on the list. They will talk about and express opinions on the current situations of the blockchain industry and opportunities in new blockchain finance from different perspectives. At the same time, the Tepleton launching ceremony will be held during the conference, which is the most exciting part.

Tepleton, a new financial solution built on cross-chain technology, is a blockchain-based value network that primarily serves the finance industry and empowers cutting-edge financial services, such as Trust, Banking, Insurance, Security and Rental. Tepleton combines Byzantine Fault Tolerance (BFT) with Delegated Proof of Stake (DPoS) as a consensus mechanism widely applied within the network. This design not only guarantees fast transfers of information and value on the chain but also, with inner isolations among Centers and Areas, well protects the network from malicious attacks. The properties of reliable security, high performance and permanent consistency are simultaneously met. The Tepleton team is the first team in the world that innovatively launches the idea of FinBlockchain, the combination of Finance and Blockchain. They define it as a new blockchain-based financial era that is open, reliable, efficient and decentralized.

Tepleton is used to build multiple applications. TANK-Quant is a good example. It is an AI-based Distributed Quantitative Investment and Trading Platform that leverages advanced technologies, such as blockchain, AI (Artificial Intelligence), web crawling, and cloud computing. Another example is TEP-Card, which will be launched by the Tepleton team in collaboration with global financial institutions. It is a safe and reliable digital-asset card that provides convenient transfers and fast settlements across countries.

It is said that Tepleton, as the leading project in the area of blockchain finance, has reached strategic partnerships with financial institutions and community representatives worldwide. They are expanding and embracing companies in financial services. When the time comes, it is believed that more opportunities and breakthroughs will appear in the market, industry and society.

VP of Ecosystem of Onboard: Another Leap Forward for Ultrain
SparkCapitalManagement - Apr 15, 2019