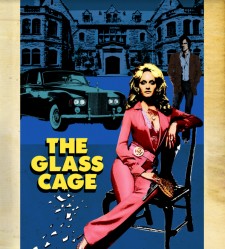 The film, set in the seventies, revolves around an aristocratic femme fatale, Brooke Bailey, who lives in a mansion she inherited from her family.  Billed as "The Female Great Gatsby of the 20th Century," she pursues an extravagant lifestyle, but becomes intertwined in a murder case.  In a complex plot with well-formed twists, Bailey becomes immersed in a story of sex, deception, and blood.

"'The Glass Cage' is pure, noir storytelling at its best. Ruvin Orbach's script stands head and shoulders above other modern thrillers because it doesn't hide between gimmickry, effects, or unearned twists,"

The film is written and directed by Ruvin Orbach, filmmaker of the critically-acclaimed mob drama, "Lucky Man" that starred Frank Vincent and Vincent Pastore.

Daniel Iron from Blue Ice Pictures is executive producing.  He has produced "The Red Violin" and "Away From Her."  Brandon Powers and Harley Kaplan are handling casting.  They have cast and produced "Buck Run" with James Le Gros.

Kaplan describes being gravitated toward "The Glass Cage" project. "I was initially drawn in by the seductive mood of the story and the deceptive depth of the characters. Setting the film in the mid-1970s evokes a wild, anything goes period in history that is not all that different from today," said Kaplan.

World-renowned cinematographer, Clark Mathis (Rocky Balboa, Norbit) is the Director of Photography and is also executive producing.  He said he was drawn to the depth Orbach's screenplay presented.

" 'The Glass Cage' is pure, noir storytelling at its best. Orbach's script stands head and shoulders above other modern thrillers because it doesn't hide between gimmickry, effects, or unearned twists," said Mathis, "I'm visually drawn to the world of 'The Glass Cage' because it is rich with storytelling opportunities.  I feel the film can lead the audience down a twisted and exciting path--with cinematic power."

Orbach stated, "I wanted to work with Clark because he shared the same passion for noir and is an excellent cinematographer and producer."

Orbach said they are in process of casting lead roles for the film, with announcements coming in the following months.  "I love femme fatales--I thought it would be great to create a throwback to the 70's and create a neo-classsic noir--something that would have the look of 'Shampoo' and the storyline of 'Body Heat.' "