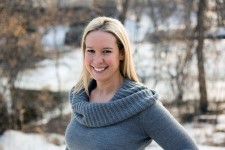 WARD HILL, Mass., January 8, 2019 (Newswire.com) - January is National Radon Action Month. Radon, a radioactive gas that is found in homes, schools and other buildings, is the only gas deemed dangerous enough to have an entire month dedicated to taking action against its existence. During this month, many state and local agencies, nonprofit organizations, and companies work separately and together to spread information about the need for testing for radon in buildings.

Over time, exposure to radon gas can cause lung cancer. In fact, every 25 minutes someone in the U.S. dies from lung cancer caused by radon. It is the primary cause of lung cancer among people who have never smoked, and creates 10 times the risk of lung cancer for smokers. There is no better time than now to encourage radon testing and, if necessary, mitigation.

Rachael Malmberg is a wife, mother, career woman, USA hockey gold medal winner, and non-smoker. She has recently been in the media speaking to whoever will listen, wherever she can find a platform, about her experiences as a healthy 32-year-old who learned she has Stage IV lung cancer. Both her childhood home and her current home tested high for radon. Prior to her diagnosis, Rachael had never heard of radon. Now, she wants to make sure everyone knows that dangerous radon levels can be in any home, undetectable unless the air is tested.

In December 2018 Rachael was named President of Cancer Survivors Against Radon (cansar.org) a nonprofit organization founded in 2005 to support and give a voice to radon-induced lung cancer survivors and their families.

This month, Rachael and CanSAR have joined forces with Air Chek, a North Carolina radon testing laboratory to create a ‘Radon Challenge.’ The challenge is to share the message, “Radon causes lung cancer so test every home,” with as many people as possible. Rachael is sharing her Radon Challenge to help others to avoid her experience.  She says, “If it can happen to me, it can happen to anyone.”

The Radon Challenge consists of a ‘Buy 1, Gift 1’ radon test kit offer, where the first test kit is only $16.98, including return postage and analysis, and the second kit is free. The purchaser is encouraged to give the second test kit to someone else and potentially save a life. All are asked to share the message so that, ultimately, every home in the U.S. will be tested for radon, as recommended by the U.S. Environmental Protection Agency. Net proceeds from test kit sales will be donated to CanSAR.

• Lung cancer is the leading cancer killer in both men and women in the U.S.

• Every hour, 27 people are diagnosed with lung cancer.

• Over the past 39 years, the rate of new lung cancer cases has fallen 32 percent among men while increasing 94 percent among women.

• Lung cancer has the lowest 5-year survival rate of the other most common cancers: only 18 percent.