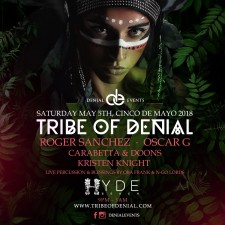 Denial, known for their innovative productions and immersive festival events around the globe, now have heavyweight musical direction to add to their recipe with Roger Sanchez as the figurehead.

Roger Sanchez commented: “Tribe of Denial was an idea I came to Christian with since I had played several of their events and wanted to join forces to develop a series of events that would create a unique sonic and spiritual experience based in tribal sounds and artists. I’m looking forward to the second edition.”

The "Tribe of Denial" series will begin as an intimate, fiery chain of events designed to stimulate all the senses and coax fans into a deep exploration of the tribal elements that have shaped our planet and musical scene to this point.

Taking place on May 5 at Hyde Beach inside the SLS Hotel in Miami Beach, it will also encompass a second theme called "Forbidden Fruit," which will take place outdoors in the garden, inspired by a modern Garden of Eden with underlit swimming pool, cabanas, performers and more.

Alongside Roger at the opening will be Miami staple Oscar G, as well as rising underground stars Carabetta & Doons, and Kristen Knight.

About Denial Events' Christian Parth, Roger Sanchez says: “He not only prides himself on the musical talent playing at his events but his ability to create an experience that fuses the music with stunning visuals and entertainment in the most scenic, panoramic environments. The majesty of Hyde Beach creates a stunning aesthetic, which will help make the party so special. Tribe of Denial at Hyde Beach - it is the perfect marriage for our particular style.”

Tickets for Tribe of Denial – Forbidden Fruit are on sale now at www.TribeofDenial.com.

Miami's Premier Nightlife Event Producers 'Denial Events' Team Up With Budding French Superstar Michael Canitrot
Michael Canitrot is currently riding high on a wave of success that has seen him propelled to the higher echelons of house music's elite. As a DJ, he's regularly touring in Asia, South America and Europe, and now, Ibiza at Lio with Denial Events for 10 legendary nights from May to October.
Denial Events - May 24, 2019