Michael Canitrot is currently riding high on a wave of success that has seen him propelled to the higher echelons of house music's elite. As a DJ, he's regularly touring in Asia, South America and Europe, and now, Ibiza at Lio with Denial Events for 10 legendary nights from May to October. 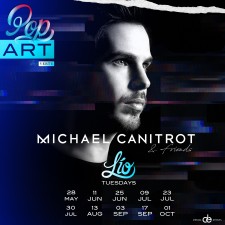 IBIZA, Spain, May 24, 2019 (Newswire.com) - ​​Denial Events, after establishing themselves this past Miami Music Week as Miami’s premier event producers and promoters, have their sights set on the global capital of dance music, Ibiza, this summer.

The events will take place at Lio Ibiza, the iconic waterfront venue owned and operated by the Pacha Group, on Tuesdays for the brand new creative concept "Pop Art" by Vertu, mixing the Parisian, avant-garde and exuberant Ibiza feeling, with Michael Canitrot as a special guest.

Since its creation in 2011, Lio Ibiza has become an Ibiza destination that attracts all eyes from around the world. As a place that embodies the utmost feelings of glamour, along with the hedonism and freedom of the famed White Isle, Lio has made a name for itself with its multi-disciplinary program of early evening dinner shows, transforming into a club atmosphere via the sea by night.

Michael's own productions are championed by the planet’s finest house music aficionados, and his longstanding ‘So Happy In Paris’ club night has taken over the world’s finest venues.

Surprising people and doing events in unexpected and historical places has always been something important to Michael.

With DJ skills honed, and having played in the biggest clubs in the world through South America, Asia or Europe, the next step was production. The last years have seen the release of ‘Chain Reaction’, ‘Sucker for Your Love,’ ’Desire,’ ‘When You Got Love’ (featuring the vocal talents of longstanding house music favorite Ron Carroll) and others tracks. Michael also mixed Defected’s ‘Playboy Session,’ joining the likes of Bob Sinclar, Dimitri from Paris, Masters at Work and many other world class DJs who have been given the honor to mix a Defected compilation.

Representing the new French Touch, blazing a trail for an entire generation of musicians, and not one to shy away from a challenge, Michael Canitrot is building his career like one of his precious sets: step by step, consistently and insatiably for his one true love: music.

The partnership has been weeks in the making, and it’s nearly showtime.

The kick-off date is Tuesday, May 28, and all info for the shows can be found at www.LioIbiza.com - https://www.popartbyvertu.com/ - http://michaelcanitrot.com/.