Phil’s BBQ donated 100% of the event proceeds to Operation Bigs, a one-to-one mentoring program that provides an extra layer of support to children and families with an active duty, veteran or gold star military parent.

Phil’s Big BBQ at the Ballpark inspired attendees to sign up and volunteer as a Big Brother or Sister and treated 600 Littles/Big Brothers and Sisters to an unforgettable day. Phil Pace, who launched the event eleven years ago, and his entire team at Phil’s BBQ donated their time to serve approximately 3,000 attendees.

“We are incredibly grateful for the generosity of Phil’s BBQ, the Padres and all our event sponsors for providing such a fun event to raise money for the youth in our Operation Bigs program,” said Lorie Zapf, CEO & President of Big Brothers Big Sisters of San Diego County. “In addition to donating 100% of the ticket proceeds, hundreds of volunteer “Bigs” and their “Littles” were able to attend at no cost, being treated to a BBQ lunch, game ticket, fun zone, root beer floats and live entertainment!”

Operation Bigs was launched in 2004 to meet the increasing demand for BBBS from military families stationed at Camp Pendleton. Since its inception, Operation Bigs has served more than 2,950 Navy and Marine Corps children. The program operates at eight schools in four communities throughout San Diego County including Camp Pendleton, Point Loma, Coronado and Murphy Canyon. In 2015, Operation Bigs also expanded their services to military children through BBBS’ traditional Community-Based program. Operation Bigs enrolls military dependents between the ages of 7- 17 at no cost to families. Volunteers are in high demand.

More than 100 Phil’s BBQ employees donated their time to set up and run the event.

Since opening in 1998, Phil’s BBQ has become famous for their award-winning BBQ in San Diego. The fast-casual restaurant has won numerous local and national awards. Phil’s BBQ has rapidly expanded over the past several years, opening locations in Point Loma, San Marcos, Santee and Rancho Bernardo, three eateries at Petco Park, a new location inside Sycuan Resort & Casino, a location within the San Diego International Airport, the soon to open location in Temecula, and continues to expand its retail market, selling Phil’s famous BBQ sauce in Costco locations around San Diego County. 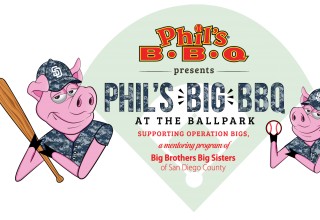 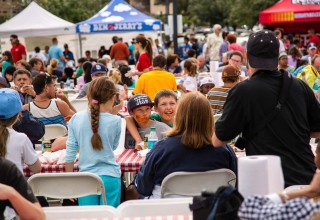