Investment Promotion Bureau of Gui'an New Area from China is introducing the New Area Gui'an to the public for investment opportunities. 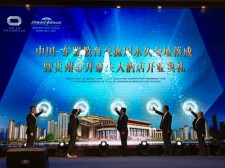 Guangzhou, China, September 21, 2016 (Newswire.com) - Inauguration Ceremony for the permanent site of China-ASEAN Education Communicating Week was held in China-ASEAN International Meeting Centre in Gui’an New Area on 10th September, 2016. With the overall floorage of about 70,000 ㎡, the Site has planned the round-table conference that offered the service of simultaneous interpretation of six official languages (China, English, French, Russian, Spanish, and Arabic) in the United Nations, a super assembly hall with 3,000 seats, Centre of Press Conference, International Art Exchange Centre, and show centre for the urban planning of the university town.

As an important platform for the opening-up of Guizhou province, the China-ASEAN Education Communicating Week was also a crucial window for the opening-up of Gui’an New Area. The completion of the permanent site of the Communicating Week would definitely further push the exchanges and cooperation between China and ASEANs forward and promote the development of the education, technology, and culture, and therefore benefiting the peoples among the area and serving the national diplomatic strategies.