Tranalysis: Pesticide Exported to Southeast Asia Accounts for 30% of Total Export Value in China in H1 2016 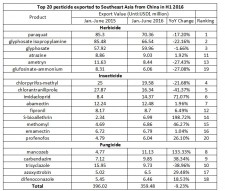 In H1 2016, the export value to Burma, Malaysia, Indonesia, Cambodia, and Laos all increased compared to last year while that to Thailand, Singapore, Vietnam and Philippines decreased in different extent.

Countries in Southeastern Asia take agriculture as the foundation in developing the national economy, with attributing over 50% for the GDP. Rice is the major plantation in Southeast Asia and vegetables and fruits are also planted there. Thus, pesticides used for rice are the major pesticide in China. As for Burma, Laos, and Cambodia, their economics are in semi-closed. Due to politics and economic factors, they are not quite interactive with the international market.

In all, the Southeastern Asia market was in a low-end market and it is of poor resilience to face the weather and other external factors. For instance, the drought and then flood in Burma this year had greatly affected its pesticide market. The drought lasted for the H1 2016 in Malaysia, which caused the stagnation of fertilizer selling in the market, according to the news in CCM Online Platform.

According to research in CCM Online Platform, we could find out the distribution channels in Southeast Asia market to better understand how the pesticides get sales in the market.

Large-scaled importers often import products in big packages. After that, they sell the big package products to small-scale importers or repackage them into smaller bags with their own brands and sell them to the dealers.

As for small-scale importers, they usually repackage the products into smaller bags with their own brands and sell them to the dealers, but they don’t sell the big package products like what large-scale importers do.

There are big and small dealers which don’t own a brand themselves and just distribute the products with other brands to the farmers. Some big dealers have an even larger scale than some importers. They often distribute products in more than ten or even several dozens of brands. Thus, the market classification is not obvious in Thailand pesticide market.

As for Malaysia pesticide market, after the rapid development in the past few years, the distribution market is quite mature.

Earlier, the pesticides enterprises often sold their products to distributors and wholesalers and they would distribute the products to dealers.

However, in the past few years, with intense competitions in pesticide market in Malaysia, price wars and gradually developing transportations in Malaysia, many pesticide companies skip selling products to distributor and wholesalers and sell them to dealers directly.

The future of the Southeast Asian market looks promising. Political stability in Southeast Asian countries, Burma has begun to take the democratic line and Cambodia has strengthened the relationship with ASEAN. With the economic development, people's livelihood will be improved. CCM believed that all of these factors will further improve the development of pesticide market.

Join us in the FREE WEBINAR with the topic:

Tranalysis is an intelligence and analysis provider on import/export data covering agriculture, chemicals, and life science industries in China. Tranalysis, founded in 2001, provides users not only a large amount of import/export data in China but also analysis to help monitor the market trends. Our clients include Monsanto, BASF, Syngenta, and SinoChem.

For more information about Tranalysis, please visit our website or get in touch with us directly by emailing econtact@tranalysis.com or calling +86-20-37616606.