A Texas girl wins NOM's 5th annual award for her service to her community and for supporting the families of the fallen officers in Dallas. 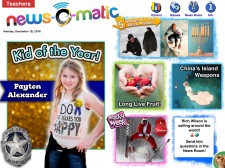 Payton, age 10, made $11,000 in just one day with a lemonade stand this summer. Then she gave it all away! Payton was raising money for the families of the police officers killed on July 7 in Dallas. “I wanted to do something,” Payton said. Funds from her stand, “Back the Blue,” went to the families of the fallen officers. “I’m just glad I was able to support them through all the hard things they were going through,” Payton said.

Just keep doing what you're doing, and show kindness and compassion to other people.

“All of the ‘Kid of the Year’ candidates had great causes,” wrote 14-year-old News-O-Matic reader Katrina. “But Payton should win,” explained the 14-year-old in the News Room. “The fact that she raised $11,000 in just one day is nothing short of amazing.”

“Payton is a sweet young lady with a loving and giving heart,” wrote voter BrookLynn, age 10. “She is always thinking of others!”

“Payton was an inspiration to our entire newsroom in New York City,” said News-O-Matic Editor-in-Chief Russell “Russ” Kahn. “She represents the best of youth engagement,” he explained. “Payton reacted to the news by taking concrete action and found a way to galvanize her community and create a powerful positive reaction.”

Payton didn’t know she was the winner until a school assembly. Her teachers brought her on stage in the auditorium. Kahn broke the news, and the students cheered! Payton had a message for young readers. “Just keep doing what you’re doing,” said the fourth grader. “And show kindness and compassion to other people.”

​News-O-Matic is the Daily News Just for Kids. Its app is available on iOS and Android, and schools subscribe at www.newsomatic.org. News-O-Matic is an exciting and engaging nonfiction experience, giving young readers a window into the world — and a reason to love reading on a daily basis. The tool allows students to make connections in meaningful ways and gives them a voice to communicate with peers across the planet. The app has more than 3 million downloads from 150 countries. With News-O-Matic, reading proficiency grew by 26% in two pilot classes.

Designed for grades K-8, News-O-Matic is an interactive digital resource that makes nonfiction accessible and engaging for all students. Thousands of schools use News-O-Matic in their literacy, science, social studies, and SEL curricula. 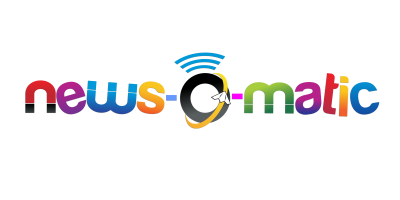 News-O-Matic's Coronavirus Coverage Earns Honor From the World Association of News Publishers for Engaging Young Audiences
The World Association of News Publishers (WAN-IFRA) names News-O-Matic as a finalist for engaging kids through the coronavirus pandemic, connecting them with medical experts, strengthening their media literacy skills, and helping them make sense of our new normal.
News-O-Matic - Apr 16, 2020
News-O-Matic to Offer News Service for Kids in Amazon FreeTime Unlimited on Alexa
Children now have access to kid-friendly, current events thanks to a new daily news briefing skill. Starting this summer, News-O-Matic will deliver age-appropriate news for kids using Amazon FreeTime Unlimited on Alexa. The audio news experience—vetted by a child psychologist—exposes young listeners to new vocabulary and a wide range of global topics to spark their curiosity about the world.
News-O-Matic - Jun 13, 2019
Newswire