Paxful Donates to Friends of Nigerian Basketball in Olympic Push 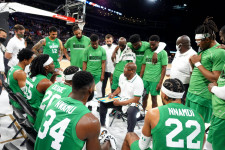 LAGOS, Nigeria, July 15, 2021 (Newswire.com) - Paxful, the leading global peer-to-peer fintech platform, announced that it will be donating to the Friends of Nigerian Basketball Foundation (FONB), a non-profit corporation with a mission to amplify and support the global sport of basketball at all levels of engagement and competition. Additionally, Paxful's Co-Founders Ray Youssef and Artur Schaback will give a personal donation to the FONB.

The donation will directly support the D'Tigers, the Nigeria men's national basketball team, during their Olympic run in Tokyo, Japan, later this month. Paxful will be donating on behalf of the Built With Bitcoin Foundation, a humanitarian organization devoted to creating equitable opportunity by providing clean water, access to quality education, sustainable farming, and humanitarian support—all powered by cryptocurrencies.

The Nigeria men's national basketball team is led by Head Coach Mike Brown, associate head coach for the Golden State Warriors. The D'Tigers are currently ranked first in Africa and 22nd in the world by the FIBA World Ranking, and they are showing great promise during the Las Vegas, Nevada, exhibition games--beating both the men's national teams for the United States and Argentina. Nigeria will tip-off its Olympic schedule against Australia on July 25 (1:20 a.m. PDT) to open play in Group B of the preliminary round, followed by games against Germany (July 27, 6 p.m. PDT) and Italy (July 30, 9:40 p.m. PDT).

Ray Youssef, CEO and co-founder of Paxful, said: "Paxful is incredibly proud to donate to the Friends of Nigerian Basketball Foundation. On the Olympic stage, the D'Tigers will bring pride and confidence to not only the people of Nigeria--but to all of Africa. It's time for Nigeria to show the world their grit and determination."

Artur Schaback, COO and co-founder of Paxful, said: "All eyes will be on Tokyo this month, as athletes bring pride to countries around the world. The Nigeria men's national basketball team already have exhibition wins under their belt - and they have the right coaches and players to bring home a medal. I am thrilled to support the team as they chase this dream."

Mike Brown, Head Coach of the Nigeria men's national basketball team, said: "We're going to Tokyo to try and win. This is the mentality of the entire organization, and we're excited to have support from companies like Paxful who truly believe in the people of Nigeria."

Paxful is a peer-to-peer finance platform for people to make payments, transactions, and send money by buying and selling cryptocurrencies as a means of exchange. Founded in 2015 by Ray Youssef and Artur Schaback, Paxful's mission is to help everyone have equal access to finance no matter who or where they are. Six million people use Paxful to buy and sell Bitcoin (BTC), Ethereum (ETH) and Tether (USDT) with almost 400 different payment methods.

Ray Youssef, co-founder and CEO of Paxful, set up the Built with Bitcoin Foundation to provide people with access to education and water. To date, the foundation has built six schools (two in Rwanda, two in Kenya, and two in Nigeria), multiple water projects, and cultivated dozens of farms. The Built with Bitcoin Foundation is funded by Paxful and the cryptocurrency community.

About the Friends of Nigerian Basketball Foundation

The Friends of Nigerian Basketball Foundation (FONB) is a non-profit corporation. Donations provide training, travel and organizational support to the FONB program. Our mission is to amplify and support the global sport of basketball at all levels of engagement and competition, while encouraging inclusion through positive international, national, community, and individual relationships with the nation of Nigeria and those who are connected to the Nigerian diaspora around the world.