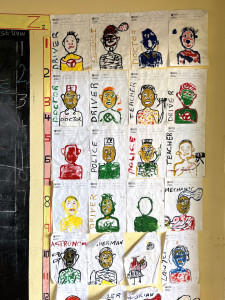 HOUSTON, April 5, 2022 (Newswire.com) - The Built With Bitcoin Foundation, a humanitarian organization powered by Bitcoin, announced that it is working alongside Satoshibles NFT to raise funds for the foundation's on-going efforts to build schools and communities around the world through Bitcoin sales of their Built With NFT Collection, with 100% of proceeds and royalties going to the beneficiaries.

The Built With NFT Collection features artwork from students at Built With Bitcoin Foundation (BWB) campuses across Africa. Students ranging from ages 3-12 were provided with paint supplies and prompted with the question "What do you want to be when you grow up?". From this artwork, the paintings were separated into two parts, and using an algorithm to combine the parts at random, 10,000 unique NFTs were created, with 5,000 NFTs available to mint on Bitcoin via Stacks, and the remainder on Ethereum.

To help bring the Built With NFT Collection to Stacks, the Built With Bitcoin Foundation and Satoshibles collaborated with STXNFT to allow the NFTs to be minted and settled on the Bitcoin network. The team used a service called LNswap, an atomic swap exchange that enables trustless swaps between Bitcoin on Lightning and assets on Stacks such as STX, to enable Bitcoin Lightning payments.

The first 13.41 ETH collected from this project was reinvested in the communities that made this collection possible. The Built With Bitcoin Foundation provided resources for art, music, culture, sports, and other extra curricular activities for BWB schools in Kenya, Rwanda, Nigeria, and El Salvador.

All remaining proceeds will fund the Foundation's on-going efforts to build communities that provide clean water, access to quality education, sustainable farming, and humanitarian support around the world with their next projects initiating in Africa, Asia, and Latin America.

Yusuf Nessary, Director of Philanthropy of the Built With Bitcoin Foundation, said, "Making the Built With NFT collection available on Stacks allows our work to be as inclusive as possible. We understand the power of Bitcoin and what it has provided to countless communities - I've seen this first-hand. We are thrilled to welcome the Bitcoin community and bring even more awareness to the project."

Brian Laughlan, Creator of Satoshibles, said, "I am excited to see this project span across multiple blockchains. The Built With NFT Collection would not be possible without the students from the Built With Bitcoin Foundation schools. By extending the NFT mint not only on Ethereum, but now to Bitcoin, we have the chance to spread the message even further and take advantage of the amazing Bitcoin community, who at its core, also aligns with the idea of using crypto, in this case, NFTs for social good."

Jamil, Founder of STXNFT, said, "Since its inception, Bitcoin has been a force for good, bringing economic freedom to billions globally. I believe Bitcoiners, more than anyone else, are in the best place to build on that vision with NFTs. Projects like Built With NFT showcase that perfectly, by cutting through the hype to deliver on a meaningful cause. I couldn't be more proud to help bring this project to life."

The Built With NFT Collection is available for minting on www.builtwithnft.org.

About the Built With Bitcoin Foundation

Launched in July 2021, Satoshibles started as a collection of 5,000 algorithmically generated crypto collectible NFTs based on the classic Bitcoin meme of Satoshi Nakamoto. Since inception, the team of two has grown to four and the project has generated over 1,800 ETH in secondary sales and is well on the way to becoming a timeless classic in the NFT space.

Satoshibles also recently launched the world's first cross-chain NFT bridge between Ethereum and BTC via the Stacks blockchain to allow its holders the ability to move their assets between blockchains.

STXNFT is the leading marketplace for creators and digital collectors to create, explore, and buy NFTs, secured by the Bitcoin blockchain.

Secure smart contracts and apps for Bitcoin. The Stacks ecosystem is a collection of independent entities, developers, and community members working to build a user-owned internet on Bitcoin. The Stacks blockchain extends the design of Bitcoin to enable secure apps and predictable Clarity smart contracts without modifying Bitcoin itself, opening innovation on the network for the first time. The Stacks cryptocurrency (STX) is used as fuel for networking activity and contract execution and can be locked by STX holders via 'Stacking' to earn Bitcoin (BTC) rewards for supporting blockchain consensus. Stacks cryptocurrency was distributed to the general public through the first-ever SEC qualified token offering in U.S. history.