Amgen employees join Patricia Heaton at an afternoon fundraiser for young adults on the autism spectrum who are pursuing careers in animation and visual effects for the entertainment industry. 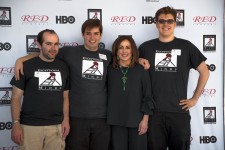 Sherman Oaks, CA, May 2, 2017 (Newswire.com) - Amgen employees delivered a healthy dose of social responsibility on Sunday when they gathered at the home of fellow employee Patricia Turney, the parent of a young adult with autism who opened her home to the third annual Exceptional Minds “Friendraiser” on April 30.

Turney’s son Andrew is pursuing his dream career as a visual effects artist, a dream that is now within his reach as a second-year student at Exceptional Minds vocational school and working studio for young adults with autism.

Amgen is the perfect example of a corporation assuming social responsibility.

More than 100 individuals came out to show their support on Sunday, including Emmy Award-winning actress Patricia Heaton (Everybody Loves Raymond and The Middle), who has given generously of her time and money to the nonprofit school. “Exceptional Minds opened its doors only six years ago and has already changed the perception of young adults on the autism spectrum. They are seen as capable, professional individuals, respected for their abilities,” said Heaton, the Guest Host for the afternoon that included entertainment by Jazz Hands for Autism.

The goal for the event was to raise $50,000 to go toward skills training and job placement for Andrew Turney and his fellow classmates at Exceptional Minds. Amgen’s employee resource group, ABLE, has designated Exceptional Minds as its charity of choice, and encourages employee involvement by matching donations dollar-for-dollar. A biotechnology pioneer since 1980, Amgen has grown to be one of the world's leading independent biotechnology companies, has reached millions of patients around the world and is developing a pipeline of medicines with breakaway potential. Amgen focuses on areas of high unmet medical need and leverages its expertise to strive for solutions that improve health outcomes and dramatically improve people's lives.

“Amgen is the perfect example of a corporation assuming social responsibility,” commented Heaton, who is known for her passionate advocacy of children and involvement in organizations such as World Vision to end poverty.

Amgen joins other major organizations in support of Exceptional Minds, among them HBO, which has a sponsorship as well as professional interest in the visual effects studio of young adults. Exceptional Minds graduates have gone on to careers at studios such as Marvel and have worked on shows such as Doctor Strange and HBO’s Game of Thrones, and on animation for Sesame Street.

Currently, the majority of the nation’s 3.5 million people with autism are unemployed or underemployed. More than 500,000 U.S. children affected by autism will enter adulthood during the next decade, with more than one in 68 children to follow.  Exceptional Minds is a 501 (c) (3) nonprofit organization that prepares young adults with autism for careers in visual effects and animation. To find out more, go to www.exceptionalmindsstudio.org.