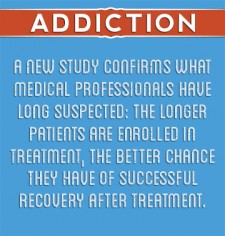 MALIBU, CA, March 1, 2017 (Newswire.com) - A new study by Akikur Mohammad, M.D., of Inspire Malibu confirms what medical professionals have long suspected: The longer patients are enrolled in treatment, the better chance they have of successful recovery after treatment.

The new study, published in the current issue of Open Journal of Psychiatry, followed 72 patients with a variety of addiction types over the course of a year. More than 3,000 data points were used to control the study. Patients were nearly divided evenly by gender with the mean average age about 30 years old. Patients were treated for a number of chemical dependencies including alcohol, amphetamine, benzodiazepines and opioids.

All these factors considered, the only significant one was the patients’ duration of treatment. Those undergoing an industry standard 30-day treatment program exhibited a 54.7% treatment success rate after one year. In contrast, patients that participated in a treatment program lasting more than 30 days experienced a success rate of 84.2%.

The study is significant because most private and government insurance programs only reimburse the patient for 30 days of addiction treatment.

“Aftercare is crucial once an individual has completed drug or alcohol treatment and is in recovery. There is a continuity of care that should be followed once initial treatment is completed. This usually involves a lower level of treatment such as outpatient care and a sober living environment. Our study shows that the absence of such treatment after 30 days significantly reduces the chances of the patient maintaining their sobriety,” says Akikur Mohammad, M.D., who led the study.

With the repeal of the Affordable Care Act currently under consideration by Congress and being strongly advocated by President Donald Trump, Dr. Mohammad said the new research should inform the nation that more, not less, funding is required to halt the country’s substance misuse epidemic. “The Affordable Care Act was the first significant federal legislation to recognize alcohol and drug addiction as a disease and to fund its treatment. The repeal of these programs would be a step backward in our fight against the nation’s addiction epidemic,” said Dr. Mohammad.

Dr. Mohammad is an adjunct professor at University of Southern California Keck School of Medicine. He is the author of The Anatomy of Addiction (Random House, 2016) and founder of Inspire Malibu addiction treatment center in Los Angeles.​