Pastor Loses 130 Pounds to Save His Wife's Life With Dherbs.com Full Body Cleanse

Pastor Hosea Collins, along with Dherbs CEO A.D. Dolphin, will appear on the Steve Harvey Show on June 6th, 2016, to talk about how he lost 130lbs in attempts to save his wife's life by giving her an actual part of himself. Find out how 5 Full Body Cleanses helped Collins on his quest. 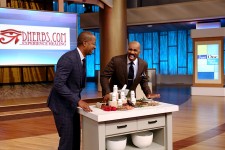 Pastor Hosea Collins, along with Dherbs CEO A.D. Dolphin, will appear on the “Steve Harvey” talk show on June 6, 2016, to discuss his journey to lose weight over the past 7 months. Collins went from 352lbs to 222lbs for a total loss of 130lbs, solely by watching what he ate, adhering to the Cleanse regimens, and continually exercising. The inspiration behind such a dramatic lifestyle change: his wife’s life or death need for a kidney. The pastor is devoted to assisting others, helping them find self-fulfillment, or helping them to unlock a God-given purpose. His belief is that every person can use this purpose to make a difference, and that’s exactly what he did.

When Collins found out that his wife needed a kidney, he immediately volunteered one of his own. Because of his weight, he was deemed an ineligible candidate to help save his wife’s life. So began his life transformation and mission to lose weight with the aid of Dherbs propelling him towards a healthier lifestyle. At his new weight of 222lbs, Collins was recently admitted into a kidney swap program. Whether or not he is a match for his wife, he will still donate a kidney and the program will find her a replacement. He has fully turned his life around and plans to continue his weight loss quest to reclaim his high school weight of 200lbs.

Tune in to “Steve Harvey” on June 6, 2016, to hear Pastor Hosea Collins’ story as he appears as a guest, along with his wife, Terrekia Collins. “Steve Harvey” airs weekdays. Check local listings or go to http://www.steveharveytv.com/ for time and channel.

Founded in 2004, Dherbs, Inc. is one of the world’s leading online herbal supplement companies. Its flagship product, the 20 Day Full Body Cleanse has been used by over 3 million people all over the world to optimize their health and help them lose weight.

Founded in 2004, Dherbs, Inc. is one of the world's leading online herbal supplement companies. Its flagship product, the 20 Day Full Body Cleanse has been used by millions of people all over the world to optimize their health.

Dherbs CEO, A.D. Dolphin, Explains Why a Healthy Colon is the Key to a Healthy Body on the Real
A.D. Dolphin, the CEO of Dherbs Inc., will appear on The Real to talk about cleansing and the importance of proper waste elimination. The average person can hold up to 20lbs of waste in the digestive tract, and A.D. has tips and a very special product to help you keep your colon healthy.
Dherbs - Apr 17, 2018