PAPUA, Indonesia, August 9, 2019 (Newswire.com) - ​​​​​Papuan tribes from the clans of Maikuin, Koula, Gakuin, Doukuin, Basikuin, Mahuze, Kaize, Basik Basik and Mahuze Milavo have issued a statement criticizing the Washington D.C.-based group, Mighty Earth, for arguing against what the tribes see as their rights to development.

The clans claim that Mighty Earth and its Director, Glenn Hurowitz, are depriving them of their rights to better livelihoods through the development of their ancestral lands.

We have a legal agreement with the company. The company has a legal license from the Indonesian government to operate on our lands. So why should somebody in the United States interfere and tell us what we can do with our ancestral lands?

Mighty Earth, in its website, describes itself as an organization that protects the environment by conserving threatened forests. This has led to a conflict with the clans’ investor-partner, Korindo Group of Indonesia.

A Memorandum of Understanding had been signed between the clans and Korindo Group whereby the clan approved the use of their land by Korindo Group in exchange for the group to develop 4,548.86 hectares of palm oil plantations for the clans.

However, articles written by Mighty Earth on the development of PT PAL in Papua province, Indonesia, which is on the indigenous Papuans’ lands, has resulted in a self-imposed moratorium as the company reviews its operations in Papua. The company’s earlier ventures in Papua had seen the creation of clinics and schools that offered their services free of charge to indigenous Papuans.

Free education and health care were what the clans were looking forward to in addition to income from the palm oil farm. The moratorium has delayed the development of the palm oil plantation for more than three years. According to the clan chiefs:

Chief Richard Nosai Koula called for a stakeholder meeting in July 2017 to resolve the issues.

In frustration, clan Chief Richard Nosai Koula appealed to the Indonesian President’s office in January of 2019 to seek his intervention to get the project started.

The clans also publicized their support for the palm oil development with a series of videos on YouTube in the hope that human rights groups or indigenous rights groups would apply pressure on Mighty Earth to stop denying the clans their right to develop their lands.

A statement from Clan Chief Colin Nosai Koula can be seen on this YouTube video where he stated:

“Our forefathers have taken care of the forests for years, for the current generation. We want change. We can’t stay in the bush. We want development. We want to change.’

As the moratorium continues on Korindo’s operations in Papua, the clans decided to issue a public statement independently in the hope that the general public will support their right to determine the use of their ancestral lands.

For media inquiries, contact can be made to the Clan Chief, Richard Nosai Koula, to arrange phone interviews. 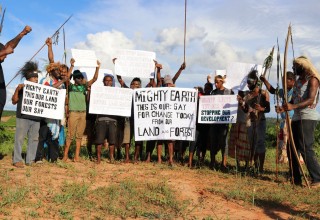 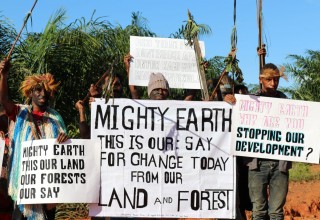