In-flight advertising is not new, but not known to all for sure. It is one of the most effective branding solutions available to a company, and there are enumerable benefits. It creates a rare and ideal opportunity for businesses to communicate & engage target customers in a much captivating manner. Here are a few reasons why In-Flight advertising and specially with paper cups is important. 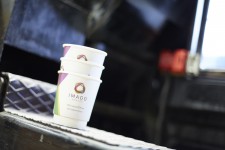 NORTHAMPTON, U.K., September 4, 2017 (Newswire.com) - A business fighting out in a competitive market surely know what a struggle it is to engage new customers into purchasing their products or services. A Business is always on the lookput for new, innovative ways to promote their brand. In-flight advertising is one of the best ways to get a brand to reach new heights. Literally.

In-flight advertising creates a rare opportunity to connect with the target audience in an unconventional but highly effective manner, and the best way to do it is by using paper cups.

So here is why In-Flight Advertising actually works.

Can Captivate the Audience

With other types of advertising, the marketing initiative can fail because the target audience has the option of simply turning their backs to your efforts. By choosing to advertise in-flight, a business can avoid this downside because passengers can’t simply get off their seats and walk away.

They have to remain seated, and in their little habitat for the duration of the flight, they are all yours to mesmerize, transform and retain as an upcoming customer. Imagine this – millions of passengers having nothing to look at except for the in-flight magazine, the digital infotainment system or the paper cup branded with a business identity.

Which of the above three gets most user attention? Of course the infotainment system, but which of the three is a more beneficial and captivating advertising platform?

Now, the Infotainment System, advertisement inserts into the content are possible but are not like TV Commercials, and hence a business mostly gets to engage the flyer with banners and logos before and after a content is played.

Considering the Cups now, they are less advertisement like, and thus of all the three options above, are less likely to be rejected by the mind as advertisement trash. Moreover, not every business is about selling a product, and thus an In-Flight shopping catalogue insert for a cost of £1000 and above is not the option.

For them, a paper cup used to served beverages in-flight is the best option, less intrusive, more eyeball time, but less cost, the ROI is much better.

Now back again to the benefits of In-Flight Advertising in general.

With an annual traffic of over 13 million passengers, there’s no limit to where a brand can travel. Using in-flight paper cup advertising, a business can not only reach local passenger but can reach customers across borders too.

Flyers don't just fly, they come and stay too, and what is better than they having the brand name in their subconscious when having to choose an option for a service or a product they might need while abroad? Which business are they more likely to choose?

With other types of marketing, marketing managers tend to focus on a specific target group based on the buyers’ age, sex, location, and other filters of this kind. With in-flight advertising, they get to widen that target group, engaging people they might have wrongfully not included in the target group the first time. They can be students, professionals, entrepreneurs, and literally everyone. Widening the target audience usually is a pleasant surprise. It usually ends up in bringing a much bigger demography into the target.

Why Is Using Paper Cups the Best Way to Advertise In-flight?

Before getting into in-flight advertising, one should consider all the options available and the one that is most suitable. There are many modes of in-flight advertising such as advertising on an in-flight magazine or branding on a boarding pass.  But are they really effective? The answer is – no, as briefly discussed a while ago too, they most likely won’t produce the expected results.

Advertising on a paper cup is the most effective way to go about this. People need a drink or two, water and beverages both, so they'll pay attention, and the satisfaction of quenching thirst will translate into a favourable consent for the brand's image on the cup.

So next time an advertisement decision is to be taken, think about In-Flight Paper Cups seriously.