London Has Its New Coffee Masters Champion for 2018 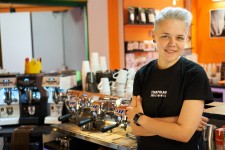 NORTHAMPTONSHIRE, England, April 20, 2018 (Newswire.com) - The 2018 London Coffee Masters has made a new champion. Freelancer competitor Agnieszka Rojewska from Poland was crowned the prestigious winner on the 15 of April 2018 at the tournament that started on the 12. She competed against 23 distinguished contenders. She climbed to the Finals to face Rob Clarijs of Dasawe Coffee Roasters and Beanspire from the Netherlands and took home a £5,000 glorious cheque prize.

Coffee Masters is a popular multi-discipline global barista tournament that is organized annually at The London and New York Coffee Festivals. Participants have to undertake seven different challenges emulating the hectic working environment of a professional barista. The battles are fast-paced and the skills of the baristas, timing, and presentations are at the very core of the competitions. The seven challenges are The Cupping, The Brewing, The Latte Art, The Order Challenge, The Signature Drink, The Espresso Blend, and The Origin.

Gin and tonic carbonated coffee made the winning beverage

Even if at the beginning of the Finals the barista lagged behind in the naming of coffees on the cupping table, she got the upper hand when it came to the Latte Art round- one of the disciplines she masters the most. The last part of the Finals was the Signature Beverage round. Rojewska concocted her drink with gin and tonic consisting of zests of orange, lime, grapefruit, brown sugar, quinine aromatics and cold water poured over Ugandan coffee. Derived from the Mzungu Project, the coffee was roasted by Gardelli Specialty Coffees, carbonated and bottled. Judges were requested to pop open the bottles with their Palace Guard bottle openers to enjoy the beverages in glasses.

Making coffee for more than ten years, the barista has been shining brightly in various coffee competitions since 2014. This year, apart from the London Coffee Masters, she equally won the 2018 Polish Barista Champion and the 2018 Polish Latte Art Champion. Her deftness and creativity have lifted Agnieszka Rojewska to the role of a coffee trainer today. The lady did her first steps into the coffee world in a coffee shop chain and then quickly opened her own coffee shop- Brisman Kawowy Bar in Poznan. The coffee shop includes a training room targeting not only baristas but consumers as well. Her first signature pattern in Latte Art was Darth Vader’s face that clients still ask for today.

In the coming years, she sees herself as a coach for young and talented baristas from Poland not just for competitions but in everyday work too. Apart from being an incredibly talented barista, Agnieszka Rojewska is also doing a Ph.D. in Economics.

Talented baristas are fond of Latte Art as it offers them the opportunity to unleash their impressive skills and creativity. Originating as a technique to skilfully pour milk foam over an espresso to create a design such as a heart and a rosetta, Latte Art has morphed into immensely more artistic decorations. Today, Latte Art has its own hallmarks consisting of pattern definitions, symmetry, contrast, and sheen without any visible bubbles. The milk has to be crafted with such dexterity that it transforms into a silky smooth microfoam.

Even if the coffee was turned into visual art in Italy, it is in the United States that Latte Art became mainstream. The first decorated cups of coffee became a fad in the 1990’s. After swiping over Australia and the Nordic countries, today Latte Art is booming in Asia. This trend is growing in parallel with an expanding coffee awareness as consumers insist on quality. A wondrously-tasting coffee presented with the exquisite design now reflects the work of professional baristas respecting the ingredients, their work and their customers simultaneously.

With the advent of social media platforms and the soaring number of drinkers sharing pictures of their drinks on Instagram and Facebook, the need to serve the perfectly tasty and visually appealing cup of coffee is more pressing than ever. On Instagram, the hashtag #latteart has reached over 5 million mentions, representing pictures and videos. At the same time, the work of baristas is gaining much popularity on social media where latte art artisans are thoroughly acclaimed.

On Instagram, a number of hashtags such as #barista_killing_it, #latterartgram, #thetrendybarista, #baristaschool or #baristalife do the job of promoting these talents. Apart from Instagram and Facebook, Latte Art has also infiltrated YouTube as baristas share their skills with viewers. Coffee shops are aware that apart from offering a tasty beverage, they need to offer a visual identity as well to give the customers something to connect with on social media. More and more coffee shops and outlets are creating captivating visual content and using hashtagging to gain visibility and target customers. Many have understood that putting their customers at the forefront of their social media strategy can be extremely beneficial at business and marketing levels.

Coffee is being promoted as an artwork

Originating as a tasty drink, coffee has currently become a muse for creativity, witnessing an exponential popularity in terms of originality and imagination because of social media. Major emphasis is being laid on visual aspects and taking into account that the caffeinated drink is the most popular beverage in the world, it does enjoy massive and rapid popularity on the Internet. To respond to the demand of the global coffee community, various coffee competitions and tournaments are now taking place yearly around the world, giving baristas opportunities to distinguish themselves but also promoting coffee as an artwork. Latte Art competitions are becoming increasingly popular on Instagram with thousands of avid followers.

The next big event that will thrill baristas and coffee enthusiasts is the World Barista Championship 2018 to be held at RAI Centre in Amsterdam from the 20 to the 23 of June. Over 650 champions from around the globe are expected to participate in this fierce competition. Competitors are required to prepare four espressos, four milk drinks, and four original signature drinks to exacting standards in 15 minutes. The whole competition can be watched via live stream.

Organic Coffee is the Next Up and Coming Trend After Gourmet Coffee Swept Across the UK Coffee Market, Says Scyphus
The Paper Cup Manufacturing business is so volatile and shape changing that veterans like Steve or Leslie have to be always on their toes to look above and beyond what's happening in the coffee and coffee cup market at this moment, and predict what's to come, and yes, Organic Coffee is set to rule now.
Scyphus - Apr 13, 2018

Cannabis Technology at the Service of Coffee Making
Cannabis and Coffee affect the same regions of the brain, that's been written about earlier, now, Leslie writes next on how cannabis planting techniques are helping grow quality coffee at places where normally coffee wouldn't grow.
Scyphus - Apr 3, 2018