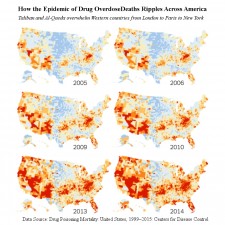 Milford, Connecticut, April 27, 2017 (Newswire.com) - "Police, Fire, EMS across the United States have been overwhelmed by overdose deaths, with PTSD a focus of the National No One Gets Left Behind Campaign," said Stephen M. Apatow of HRI:H-II OPSEC.

Reaching a new peak in 2014, the New York Times reported 47,055 people, or the equivalent of about 125 Americans every day, died from drug overdoses, climbing at a much faster pace than other causes of death. The trend is now similar to that of the human immunodeficiency virus, or HIV, epidemic in the late 1980s and early 1990s, said Robert Anderson, the CDC’s chief of mortality statistics.

According to the "DEA Warning to Law Enforcement: Fentanyl and Carfentanil Exposure Kills," the largest risks for officers and detectives is coming in contact with fentanyl during the course of enforcement, such as a buy-walk, or buy-bust operation. Additionally, simply patting someone down, or searching their pockets, can put an officer at risk. The onset of adverse health effects, such as disorientation, coughing, sedation, respiratory distress or cardiac arrest is very rapid and profound, and can occur within seconds of exposure. Canines are also susceptible to immediate death from inhaling fentanyl. K-9 detection units are particularly at risk when sniffing potential contraband.

Redefining U.S. and Global Security Support: No One Gets Left Behind

"Military member and emergency personnel; law enforcement and firefighters, et. al., and their plight with suicide do not get the appropriate level of attention - especially associated to PTSD, which resonates and impacts their lives over extended periods of time, and often leads to severe depression," said J. Mikulski, MSA.

Humanitarian Resource Institute (HRI) and H-II OPSEC Expeditionary Operations focus on defense support for humanitarian and security emergencies, currently beyond the capabilities of governmental, UN, NGO and relief organizations. In 1994, HRI worked with the Federal Emergency Management Agency and Emergency Food and Shelter National Board Program to develop a 3,100-county network to assist with education and coordination of unmet needs administrators, to help frontline service programs "bridge unmet needs to untapped resources." In 1999, this work expanded to the development of the International Disaster Information Network (IDIN), to connect leaders in 193 UN member countries, supporting education and remediation for the Year 2000 Conversion.

Unconventional Leadership Development Training Conferences
"Setting an example is not the main means of influencing others, it is the only means." ― Albert Einstein
Humanitarian Resource Institute - Aug 13, 2018