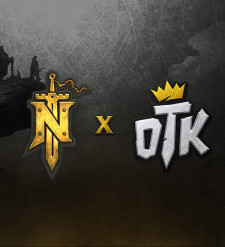 AUSTIN, Texas, June 8, 2022 (Newswire.com) - Passion is the play, and the freshly inked partnership between OTK and Notorious Studios is a reflection of both organizations' zeal and love for gaming - specifically MMOs, RPGs, and expansive, imaginatively populated worlds. Though it's certainly unexpected for OTK to invest in a game studio, the new relationship between Notorious and OTK is more noteworthy for how naturally it fits.

Both organizations have been familiar with each others' works for years; Notorious was founded by former World of Warcraft developers, while several OTK influencers cut their content-creation teeth on WoW and other Blizzard titles. Additionally, the studio was named after co-founders' Chris Kaleiki and Douglas Frazer's WoW guild, an undeniable parallel to the friends-first origins of OTK, gaming's leading influencer collective. So when Chris Kaleiki contacted OTK COO Tipsout in 2021, a deeper partnership felt inevitable.

For Notorious, the opportunity to team up directly with gaming influencers has considerable advantages, especially in today's hyper-competitive gaming landscape. Said Chris Kaleiki from Notorious, "Founders often ask me the best way to validate a game idea, and honestly, I think bouncing that idea off influencers in your given demographic is the best test of your thesis at that stage. And that's what drove Notorious to connect with OTK in the beginning."

For OTK, the move represents a paradigm shift in the previously tenuous relationship between game developers and content creators. "OTK and Notorious coming together represents what we believe to be the future of game development and publishing," stated Tipsout. "Never before has an influencer group of our size partnered with a game studio of Notorious' caliber. We believe this partnership will change indie game development forever."

Asmongold, OTK's largest content creator, also expressed his excitement for the partnership; "We've talked about developing games for a long time, so the idea of partnering with a team that aligns so closely with how we see gaming was a no-brainer."

Notorious Studios is expected to premiere "a sneak peek" of Project Honor at the OTK Games Expo on June 8.

Notorious Studios was founded in 2021 by games industry veterans Chris Kaleiki and Douglas Frazer with the mission to unite players in deep worlds. Headquartered in Irvine, California, Notorious is committed to a work environment based on mutual respect, creative freedom, and autonomy. For more information, please visit notorious.gg.