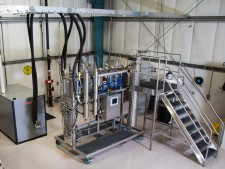 Portland, Oregon, February 8, 2017 (Newswire.com) - Local Portland cannabis company, Odin Enterprises, has begun production of CO2 cannabis oil using their new 100 liter MRX CO2 extractor. This mammoth two-story machine literally shadows most extractors which only have a 20 liter capacity. With the addition of this extractor, Odin has the opportunity to more than double their current production.

As the cannabis industry has evolved, there has been a shift in public visibility. “We spent a lot of time staying under the radar,” says Odin CEO, Paul T. Amsbury. “Now it is time to let the people of Oregon know who we are. With this new extractor Odin is now in the position of being the top CO2 oil producer in the state.”

Odin will continue production of their WHO? branded oils on their four finely tuned 20 liter CO2 extractors. The addition of the 100 liter extractor will help them meet the overwhelming demand for their products and increase their dispensary footprint to over 400 stores.

Odin is an Oregon-based holding company with cannabis-related investments in Oregon and Washington. Odin’s brand portfolio includes Freya, Odin, and Who?. Through Odin Enterprises’ subsidiaries, Odin is poised to provide quality cannabis products in several states, including Oregon, Washington, Colorado, and Nevada. Founded in September 2015, Odin’s mission is to produce the highest quality, all-natural cannabis products in every state where cannabis is legal.

Odin is an Oregon-based holding company with cannabis-related investments in Oregon and Washington. Odin's brand portfolio includes Freya, Odin, Who? and Pluto.