DEBUT EP - THE VOID - OUT FEBRUARY 2020 FROM ARTEKAL MUSIC 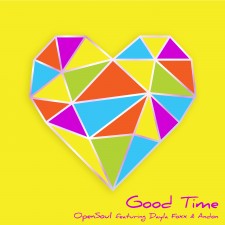 From a simple reggae set-up, smooth melodic beginnings, through an array of voices and melodies, an ever-immersive rhythm, and a beautifully eclectic, colorful soundscape on the whole, the track works hard but utilizes simplicity. These qualities fuse well in drawing listeners over and holding onto to their affection right the way through

The "Good Time" single release comes on the heels of the summer collaboration with Andon "Give It To You," which racked up over 200,000 views on YouTube and over 100,000 streams on Spotify. All done independently. OpenSoul, fresh off his performance in the hit Netflix series Top Boy has been busy writing and recording music for his upcoming EP, Void, slated for release in February 2020. He has been working with an impressive list of producers scattered across the globe.

Rhythmic and fun, holding on to the eclecticism of the three artists delivering this hit song, "Good Time," is an ode to enjoying life and the relationships that make it so fantastic. The song is written by OpenSoul, along with featured artists Andon and London based rapper, Dayla Foxx. The track is produced by Kavin Henry from Jamaica, who has worked with a slew of reggae acts, and LaBack in France. The song comes together as a fun party anthem that is at home on top 40, gym, commute, and club playlists alike.

OpenSoul is a singer, songwriter, and actor. The multi-talented and multi-faceted performer has featured in Netflix's reboot of Top Boy. Playing the role of Donovan, the lead character's cousin. The budding star is known for his unmistakable vocal styling and prolific songwriting. OpenSoul lives on the north coast of Jamaica in the destination town of Negril that is uber-popular with visitors to the island. OpenSoul has a passion for entertainment and performing, whether in front of the camera or behind the mic.

Writing for his upcoming EP, OpenSoul, like most songwriters, favors his own experiences of love, pain, and loss. The vulnerability of sharing so much from a personal perspective is viewed more favorably for its cathartics and ability to be relatable. Refusing to acknowledge deep emotions can push one to a breaking point. OpenSoul believes there is nothing wrong with having songs written by others, but that there is just something "magical" when one writes about their own experiences, causing the connection between the singer and the lyrics to be immaculate. This connection causes a song to be whole so that it resonates with others.

"Void" will be available in February 2020 and will be a collection of songs about love gained and loved lost.