MIAMI RAPPER KICKS OFF 2020 FROM QUARANTINE 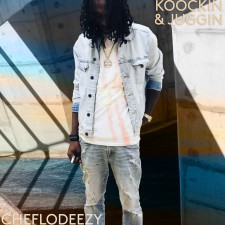 MIAMI, May 1, 2020 (Newswire.com) - Miami, like most cities, has been grappling with the effects of the coronavirus. The usually teeming city, known for its vibrance and energy, has ground to a halt in an effort to slow the spread of the virus via social distancing measures. Rapper Cheflodeezy is hoping for the return of life to his beloved city and is choosing to let the creative juices flow during a difficult time for the city, choosing to release his newest single “Koockin & Juggin”. The high-energy, trap-infused single is Deezy’s first of the year, with a continuous stream of releases planned as the year progresses.

As an introduction to his sound and style, Koockin & Juggin is an alternative hip hop anthem with a classic darkness to it that conjures up memories of the most confident and striking acts from way back when. In this case, there's a contemporary freshness to the trap beat, the haunting rise of the piano, and the unforgiving determination and grit in the vocal tone.

The single, written and performed by Deezy is semi-autobiographical and chronicles some of Deezy’s favorite pastimes, as well as laying out some of Miami’s unspoken street code. The single is assisted with a beat production from producer Ace Bankz. The single is broadly available on May 1, 2020.

Cheflodeezy is a Jamaican-born, Miami-based artist. Deezy moved to Opa Locka, Miami at the age of 9, where he lived with his mom and younger brother. Deezy found his love for music as a teenager at Miami Central High, when his best friend at the time introduced him to the beat-making platform Fruity Loops. After high school, Deezy fell into the street life. By the age of 21, he had multiple arrests, struggled with homelessness and the loss of a few close friends to gun violence. After almost being incarcerated for undisclosed cases and the birth of his first child llamiyah, Deezy decided to change his life.

He went to culinary school and pursued a career as a professional chef. This is where he got the nickname “Cheflodeezy”. He free-styled and had other students listen to his music on a daily basis. After graduating from culinary school, Deezy began to climb in the hospitality industry. Cheflodeezy started to literally blow up in the culinary world, where he was featured in SoHo House world magazine as a rising star on Deco Drive and cooking for various celebrities on visits. Never letting his love for music die, Cheflodeezy went to recording studios on his days off and wrote music before and after work on most days. Still dream-chasing and dropping music weekly, Cheflodeezy does this for the love of the craft.