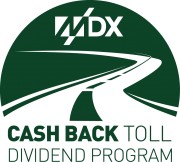 Miami, FL, January 7, 2016 (Newswire.com) - Motorists in Miami-Dade County can once again register in the MDX Cash Back Toll Dividend (CBTD) Program to save money on MDX tolls from January 11, 2016 through March 31, 2016. Now in its’ second year, the CBTD is MDX’s frequent user program. Customers who frequently drive on SR 112/Airport Expressway, SR 836/Dolphin Expressway, SR 874/Don Shula Expressway, SR 878/Snapper Creek Expressway, and SR 924/Gratigny Parkway are eligible to participate. It is free to register and there is no cost to participate.

The program was introduced in 2015, and is the first of its kind in the United States. In 2015, $2.2 million in cash back rebates were distributed to CBTD members. Approximately 38,000 customers received a check reimbursing 30 percent of the tolls they paid while enrolled in the program.

“We are excited to be able to offer this innovative cash back rebate program again in 2016,” MDX Chairman Louis Martinez said. “It is our way of thanking of frequent users and business owners who use our expressways on a regular basis.”

The way the program works is simple. Each fiscal year, which occurs from July 1 to June 30 annually, after the close of its financial books, MDX will declare a toll distribution of dividends to members of the program. This is after the agency meets its financial obligations, including making its annual principal and interest payments, meeting its senior debt coverage ratio, and covering its operation and maintenance costs.

"We are thrilled to receive money back from MDX," said Alex Jimenez of All Dade Fences, a small business in Miami that received cash back in 2015. "Because we are enrolled in this program, we've seen how much we can save. It’s great that MDX is doing this for the community.”

To qualify for the program, members must have a SunPass account in good standing, and spend $100 annually on tolls on any of the five expressways maintained by MDX – SR 112/Airport Expressway, SR 836/Dolphin Expressway, SR 874/Don Shula Expressway, SR 878/Snapper Creek Expressway, and SR 924/Gratigny Parkway. MDX will return excess toll revenues directly to its customers through the Cash Back Toll Dividend Program.

"I’m glad I joined the MDX cash back program last year," said Gail Coats, a local school teacher who received cash back through the CBTD Program in 2015.  “It’s nice to get cash back just for using the expressways that I travel on every day.”

New members can sign up beginning on January 11, 2016, by visiting www.mdxway.com/cashback, open enrollment ends on March 31, 2016.  For questions about the MDX Cash Back Toll Dividend Program or need assistance, please call 786-433-4103, Monday through Friday from 9 a.m. to 5 p.m. or send an e-mail at cashback@mdxway.com.

MDX operates and maintains five user-supported expressways in Miami-Dade County –  SR 112/Airport Expressway, SR 836/Dolphin Expressway, SR 874/Don Shula Expressway, SR 878/Snapper Creek Expressway, and SR 924/Gratigny Parkway.  MDX expressways are funded by toll revenue, which is reinvested back into the community and funds the construction of projects that alleviate traffic congestion, create thousands of local jobs and provide new opportunities to small and local businesses. The agency also gives back a portion of its annual revenue to qualified drivers through the MDX Cash Back Toll Dividend Program.