Former Contestant of The Voice Joins Forces with CEO of Christian Health Share to Bring Compassion, Healing, and Brotherly Love Back Into Health Care 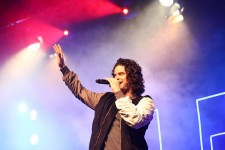 IRVING, Texas, October 15, 2020 (Newswire.com) - OneShare Health, an ACA-exempt, Christian Health Care Sharing Ministry (HCSM) based in Texas, will be collaborating with Christian Latin Pop singer-songwriter Johnny Rez to bring more awareness to Christian HCSMs and the importance of faith, community, and lifting each other up in times of need.

Rez—who's been featured on TV programs and networks including ABC, Telemundo, the American Music Awards (AMAs), American Idol, and Season 11 of NBC's The Voice—said he's excited by the prospect of partnering with OneShare Health, a company he deems has the "best interest of its Members in mind and does not falter when it comes to serving God and serving people."

"In this world, it's so easy to get caught up with one's own needs," Rez said, "but OneShare Health does an excellent job of keeping the ministry focused on giving back and caring for all."

A native of Miami, Florida, and lifelong Christian, Rez's professional music career began in 2015 when he released his first single, "All This Time" (also titled "Siempre En Ti"). Since then, his reach has become international in scope. Themes of Rez's music include worship and "seeking God's presence," which aligns with CEO of OneShare Health Alex Cardona's Mission and Vision.

"Johnny is not only an incredible musician," said Cardona, "he's also an exemplary disciple of God and proof that His plan for each of us supersedes all. As a Christian health share leader, faith and worship are part of my daily routine, just as they are part of Johnny's. We see God in everything we do; He is the force behind our successes, the Presence we turn to when the valleys get too steep. With God as our ally, I know Johnny and I will be able to make extraordinary things happen, including, first and foremost, bringing compassion back into health care."

While the concept of Christian health sharing can be traced back nearly four decades ago, faith-based health care is still a relatively new concept in the United States and abroad. Rez, however, said he views it as "a powerful and ideal solution," and that without faith and compassion in health care, the industry would be nothing more than a business.

"There is nothing more rewarding than being a part of something that you know will also reap an eternal reward," said Rez. "I can't see a better place to be than in a community of people who love God, step out in faith to help each other, and take care of their families, all at once."

Regarding OneShare's position in the health care industry, Rez said he believes there is "much more to come" with a "great leader and pioneer" like Cardona leading the charge.

"His fearlessness and passion to help people and provide affordable health care to those in need, is what started OneShare Health," said Rez. "He is a man after God's own heart, and his humility and kind spirit are what have enabled him to be used by God in such a time as this. I have faith that, together, we can increase the reach of OneShare Health, exemplify the story of the gospel and God's love for us, and aid those in need around the world."

Anyone who is interested in learning more about Johnny Rez and how he and OneShare Health are making a difference is invited to follow them on social media, visit OneShare's Mission in Motion page, or subscribe to the non-profit's Christian health blog.

About OneShare Health: OneShare Health is an ACA-exempt, non-profit, Christian Health Care Sharing Ministry (HCSM). HCSMs are not traditional health insurance and do not accept risk or make guarantees regarding payment of bills submitted by Members.

OneShare Health is a Health Care Sharing Ministry that exists as a witness to the love and faithfulness of God as He provides for the medical needs of His children.