Omni Fund’s co-founder Zack Peng said that insurance premiums are high because insurance companies spend a fortune on operations, which are paid for by consumers. In 2017, insurance giant StateFarm reported a total earned premium of $42B, but paid out only $31B. That means for every $4 premium that a customer paid, only $3 is used toward covering their stuffs. However, the excess premium did not go in the pockets of StateFarm either, as it spent a whopping $16B on operations such as IT and management, and ended up with a loss of $4.2B before investment gain.

In contrast, smart contracts can perform almost all of an insurance company’s functions on a negligible amount of transaction fees. Smart contracts are special software that runs on the Ethereum blockchain. Assets are securely stored in smart contracts by cryptographic locks that have a billion more combinations than the number of stars in the universe, and managed autonomously by the smart contract’s codes that are publicly auditable and guaranteed to always execute by mathematics.

By eliminating the high cost of operations, Omni not only allows customers to pay lower premiums for the same coverage but also brings risk prevention solutions to verticals inaccessible to insurance companies. Zack explained that:

“While Bitcoin is banking the unbanked with sound money, Omni Fund is insuring the uninsurable with smart contracts. In the past decade, globalization and technological advancements created a large number of long-tail asset classes and career options. These long-tail verticals have risk-hedging needs just like mainstream verticals, and when put together is a multibillion-dollar opportunity. However, each of these verticals is too small on its own to justify insurance companies’ investment, and thus are left uncovered. Now, people can create their own risk-hedging products using Omni Fund’s tool to protect themselves, even if the vertical only has 1000 people.”

Omni calls the risk-hedging pools created on its platforms “community fund,” because they are decentralized and community-based. Zack says that Omni Fund is not an insurance company and does not profit from excess premiums, but instead charges a small flat fee for transactions on the smart contract:

“(Not profiting from excess premium) aligns our interest with that of the user. Insurance companies profit from excess premiums, so they are incentivized to charge as much as possible and deny claims whenever they can. By taking a flat fee from actual user activities, Omni Fund succeeds only if many people use it. That means we’re more incentivized to help each community fund grow.”

Omni Fund also appears to be the first DApp (decentralized application) platform that lets users directly spend U.S dollars. Usually, DApps require users to purchase their native cryptocurrencies in advance, which can be extremely volatile and is a significant hurdle to mass adoption. To address this issue, Omni Fund partnered with fully regulated U.S. exchanges to support USD payments, so premiums and payouts are always constant regardless of the price of tokens.

In addition to supporting fiat currencies, Omni Fund also developed other features that enhance the user experience. For instance, users can verify their identity by uploading a photo of their driver license that’s then analyzed by computer vision algorithm. Post-collision claims can also be made directly on the user’s phone through a combination of GPS location and encrypted live stream videos, shot from Omni Fund's claim page.

The first community fund created on Omni is the Uber Driver’s Income Replacement Fund. After collisions, full-time Uber and Lyft drivers’ vehicles are sent to repair shops for several weeks, during which time they cannot drive and thus lose out on their primary source of income. As a solution, the Driver’s Income Replacement Fund would pay up to $2,000 to drivers after a serious accident to help pay bills and cover their loss of income. 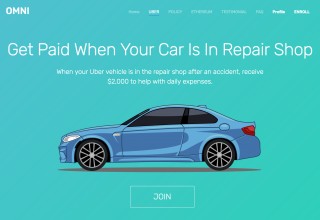 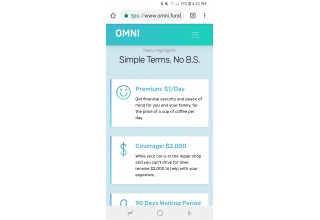