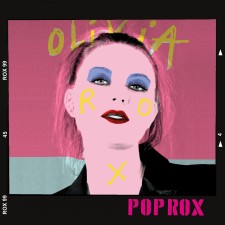 This vibrant, colorful fashionista video with the message to just be yourself was filmed in L.A. and directed by Tamara Van Cleef.

This rising pop artist has been named a new artist to watch after her “It Girl” lyric video received over a million views on YouTube. On PopRox, Olivia continues to make a strong impression, with vocals compared to Mariah, Pink and Adele. All the while showcasing her powerful songwriting skills - having written the entire record on her own.

CEO of Songbird Records, Tamara Van Cleef says, “20-year-old Olivia Rox’s debut album, ‘PopRox’ features Olivia's powerhouse, rock goddess vocals. She literally delivers all of her own prolific songwriting, which, ultimately, leads to unshakable hooks and dynamic productions. They'll make you wanna sit down and listen to the entire record, like in the old days. This feel-good, catchy album takes you on a journey that is both well-rounded and cohesive, giving you everything from positive music, such as ‘Be Happy’ (where she flirts with reggae and ska), the unique cleverness of ‘Galileo’, to the more introspective and vulnerable lyrics in ‘Outcast’ (‘I’m outcast, all alone, I wish I could be safe at home’). All the while blending pop and rock perfectly on this 12 track album. So if you didn’t happen to see her fly to the top 10 on American Idol Season 15 or you’ve never heard of Olivia Rox, then learn her name right now, because she’s here to stay! Drops 9-19-19."

Olivia Rox Treats Fans to New Acoustic Album for Free Amid Coronavirus Pandemic
As we shelter at home to help slow the spread of COVID, Songbird Records announces that rising pop artist Olivia Rox has gifted "Just A Girl & Her Guitar", an acoustic album exclusively on her website for free to her fans.
Evolution Music Inc - Jul 20, 2020