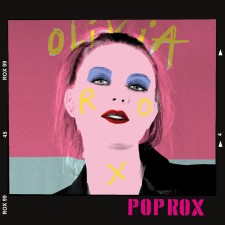 LOS ANGELES, September 19, 2019 (Newswire.com) - The wait for Olivia Rox’s debut album is over. Her debut pop album, “POPROX”, has been released internationally today, Sept. 19, 2019, via Songbird Records. With the rocket success of the album’s lead single “It Girl”, it's no surprise that the singer's debut album is so highly anticipated.

On POPROX, Olivia continues to make a strong impression, with vocals that have been compared to singers like Mariah, P!nk, Adele, and Ann Wilson. Emerging pop-rock artist/singer/songwriter/multi-instrumentalist Olivia Rox is ready to take on the world with her new full-length album POPROX, which is 100% written by Olivia herself. The bright, fresh, inspiring upbeat tune “It Girl” was produced by the production team, dubbed 3M, comprised of Van Cleef/Hill/ Rox, and is mixed by multi-platinum, 14-time Grammy winner with 27 #1 singles, Mick Guzauski (Pharrell Williams, Daft Punk, Jeanelle Monae, Mariah).

Rox wrote the first single “It Girl” as an empowering message for girls to stay true to yourself, and embrace your inner It Girl. This pop-rock jam features live instrumentation, mixed with sounds of today, and shows off Olivia Rox's vocal prowess and whistle-tone. “It Girl” premiered on the radio early fall 2019 and is quickly rising up on the charts, currently at #47^ on the Top 40 Pop Radio MediaBase Activator charts. The official music video “It Girl” premiered August 2019 (watch now: https://youtu.be/efz1ehgLfTc). This vibrant, fun, colorful, fashionista video was directed by Tamara Van Cleef. This rising pop artist has been touted as a new artist to watch, as Olivia’s  “It Girl” quickly received over a million views on YouTube.

Rox has been revealing on social media that her life’s been consisting of recording, rehearsing her new band, filming music videos and her online documentary “Roxumentary". She's also been hitting the dance studio hard, as she prepares for her upcoming POPROX tour.

The follow-up to "It Girl" will be met with a major event to launch the album. The singer's label CEO, Tamara Van Cleef, took to Twitter to dish details on Rox’s latest music videos, the release of the album and to remind fans to keep their patience. Van Cleef tweets, “Rox releases her debut album POPROX to the world today. The album is incredible, videos are fire, the album package is rich and luxuriously quintessential pop. There are music videos for every song on Olivia Rox’s upcoming release of her album POPROX, and they are nothing less than spectacular. We'll be sharing them soon; there are so many amazing things coming down the pipeline. Olivia Rox fans should be excited. As we said at the beginning of this campaign, all good things come to those who wait."

“POPROX” the full-length, 12-track album, including single “It Girl”, is available on CD and all digital/streaming platforms globally, including Spotify, Apple Music, Amazon Music, and iTunes.

Go to oliviarox.com for more.