Oh, Shhh… Sugar! There is a Candy Robber on the Loose: Outfit7 Launches 'Talking Tom Candy Run' to Help Save the Candy

Mobile Gamers Run, Jump, and Slide Through a Candy-Filled Endless Runner in the Latest Game from Talking Tom and Friends

LOS ANGELES, August 16, 2018 (Newswire.com) - Outfit7 Limited, the multinational entertainment company behind Talking Tom and Friends, announced today a raccoon robber has run off with Talking Tom’s candy. Now, the company is calling on its billions of fans around the world to save the candy in a seriously sweet new adventure game, "Talking Tom Candy Run."

The first order of business: choosing which of the Talking Tom and Friends characters to play as; each comes with a unique superpower. Next, gamers can select a magic buddy, like a dragon that blows fire, to provide some extra backup against any sticky situations that arise in this fun 2D side-scroller.

“Warning: this game is so fudging entertaining it is hard to put down,” says Boris Dolenc, Chief Product Officer of Outfit7. “Each character is unique, touting different superpowers. You can surf, smash, slide through immersive, high-quality 2D graphics and backgrounds that make you feel like you are starring in your own cartoon.”

Save the Candy! Talking Tom and Friends call on all mobile gamers, candy lovers, treasure hunters, and adventure seekers around the world to help chase down the bandit and recover Tom’s candy. Download "Talking Tom Candy Run" free today at https://go.onelink.me/GFd1/87726dfe.

Outfit7 Limited is one of the world’s fastest-growing multinational family entertainment companies. The company is best known for its flagship franchise, “Talking Tom and Friends,” which became an overnight global sensation when it launched in 2010. In the years since, Outfit7 has expanded its portfolio to include a suite of award-winning games, a 3D CGI animated series, digital video content, chart-topping music videos, and a licensing program in order to meet the amazing demand of its fans. In fact, Outfit7’s apps have now been downloaded over 8 billion times in total, and a whopping up to 350 million fans play with them every month. It’s game on, world. For more information, please visit https://outfit7.com. 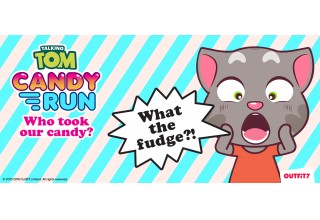 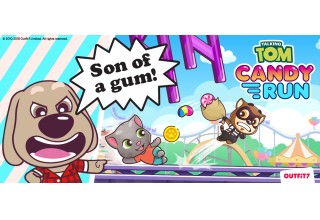 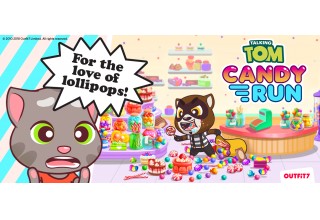