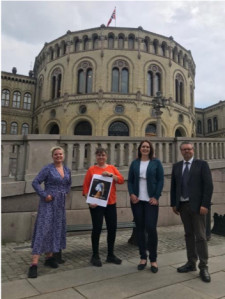 OSLO, Norway, July 7, 2021 (Newswire.com) - After over 100 lawmakers from the United States, United Kingdom, and Japan wrote to their heads of government calling for the initiation of the International Agreement to Prohibit the Eating of Dogs and Cats as proposed by the World Dog Alliance (WDA), four Norwegian lawmakers co-signed a letter to Erna Solberg, Prime Minister of Norway, on June 18, urging the same:

Ulf Leirstein, the leading lawmaker behind the Parliamentary letter, has long been a strong supporter of the WDA. In March 2019, the WDA held an event in the Norwegian Parliament jointly with Ulf Leirstein to advocate for legislation to ban dog and cat meat.

Siv Jensen, the leader of the Progress Party and Minister of Finance in the government cabinet, expressed her support for the WDA's campaign on social media. She also quoted remarks made by her fellow party members:

"Norway, as a nation, should be 100% behind this campaign" - Silje Hjemdal

"Norway has been at the forefront of animal welfare issues for many years. This is why Norway has a strong voice on the international level" - Åshild Bruun-Gundersen

Norway is a country of animal lovers. Roughly half of all households in Norway own pets: there are 1.2 million dogs and cats in the country which has a population of 5.4 million. Over 1.1 million Norwegian people are enthusiastic followers of topics related to dogs and cats. There is not a single stray dog in Norway thanks to the progressive thinking of the Norwegian people. In 2015, the Norwegian government launched an animal police pilot project to prevent animal cruelty and violence, showing the advancement of animal welfare policies in the country.

As the country with the highest Human Development Index in the world, Norway has a significant influence on global civilization and moral standards. For this reason, the Nobel Peace Prize is awarded each year in Oslo, and the winner is selected by the Norwegian Nobel Committee.

In the past, environmental issues and the understanding that human activities cause climate change were dismissed by many as conspiracy theories. In 2004, the Nobel Peace Prize was given to Wangari Maathai for her contribution to sustainable development; and, in 2007 the prize was given to Al Gore and Intergovernmental Panel on Climate Change for their efforts to build up and disseminate greater knowledge about man-made climate change. Such moves shifted the world's focus to environmental protection, setting off a green wave in many countries.

In light of this, the joint letter from the Norwegian lawmakers is of profound significance. The COVID-19 pandemic has raised awareness for animal welfare issues around the world, and now is the perfect time to stop the practice of eating dog and cat meat. Genlin, the founder of the WDA, believes that if Norway initiates the International Agreement to Prohibit the Eating of Dogs and Cats, it will serve as a call to action on the international stage, and will inspire more people to reflect on the relationship between animal welfare and world peace.