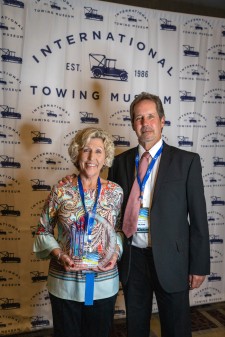 Harris, co-owner of Ray Harris Towing, is only the second woman and the fifth recipient of the annual award. With the Dave Jones Leadership Award, Harris has taken home nearly every major towing industry honor. In 2016, she was inducted into the International Towing Hall of Fame, also based in Chattanooga.

"Dave and I go back a long way. He was a really good man. The whole family is just a great family, and to be associated with the family is a real honor," Harris said. "Those are big shoes to fill."

The late Dave Jones was a Florida-based towing and recovery industry pioneer who helped launch the national Towing and Recovery Association of America (TRAA) and pushed for higher towing standards. The Dave Jones family selects each year's winner in conjunction with Tow Times magazine.

Harris did not start out in the towing and recovery industry. In fact, she worked many years as a public school teacher before working part-time at Ray Harris Towing, a family-owned towing business founded over 65 years ago by her late father-in-law Ray Harris, and which she co-owns with husband Dennis. The three are members of the Towing and Recovery Hall of Fame, one of four such families nationwide.

She likens her towing career to teaching. "It’s still teaching in a way," she said. "As an owner, you try to pass it along. You try to teach people what you’ve learned over the years and encourage them to get out there and do the same."

She has been active in towing and recovery industry issues as past president of the Towing and Recovery Professionals of North Carolina, where she still heads the legislative committee and was a force behind several initiatives, including adding towing operators to the state's Slow Down-Move Over law.

Harris also was president of the Women of the Towing and Recovery Association of America and was head of its Scholarship Committee. At Ray Harris Towing, she formed B’s Hope, donating proceeds of sales of abandoned vehicles to the WTRAA Scholarship Fund to benefit the students of towing industry workers.

She credits towing pioneers such as Dave Jones, Betty Cornwell (the 2015 Dave Jones Leadership Award winner and first woman to earn the honor), Ray Harris and husband Dennis for pushing her to excel.