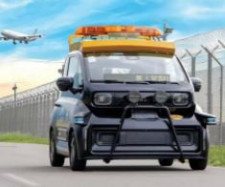 HONG KONG, March 14, 2022 (Newswire.com) - Hong Kong International Airport (HKIA) unveils the deployment of Autonomous Patrol Car (APC) from Teksbotics and its technology partner UISEE. APC is an all-weather and full-process unmanned vehicle. The first stage of APC was deployed for autonomous perimeter patrolling along the South Runway Road of HKIA.

Currently, four unmanned APCs have already started operation from September 2021 and are patrolling the South and North Runway. During the patrol, APCs can automatically detect if someone has entered the warning zone by using video analytics.

APC is equipped with 8 high-definition cameras, which can monitor people intruding and abnormal conditions of the barbed wire along the boundary. If there is any abnormality, APC will immediately alert the on-duty airport staff. The vehicle is also equipped with 3 lidars and 2 sets of differential global positioning systems (dGPS) to monitor people and objects around it to avoid collisions and ensure safe operations. APC could withstand the wind speed of 180 kilometres per hour, and it has also been successfully tested to work normally during the typhoon hitting Hong Kong earlier in October 2021.

"Our engineers have been working closely with Airport Authority Hong Kong and other business partners in the work of implementation of the vehicle with our autonomous driving system. We are very proud of having successfully launched one of the world's first unmanned patrol vehicles at HKIA," says Teksbotics CEO Berry Leung.

AET has been now operating for over 790 days covering more than 100,000km of fully autonomous driving. AET was introduced to replace routine driving with the human driver which offers robust and safer logistic moving and minimize human errors. In future, AET will be also deployed for cargo transportation.

The autonomous unmanned vehicle also has the benefit of reducing air resistance to improve fuel efficiency and lower emissions, making them an eco-friendly technology.

Teksbotics is one of the world's leading and Hong Kong's largest autonomous driving solution providers and aims to help customers automate transportation, distribution and patrolling.

Teksbotics and Alshrouq Pilot Last-Mile Autonomous Delivery in Saudi Arabia
Teksbotics and Alshrouq Express has started a pilot of last-mile autonomous delivery in the King Abdullah University of Science and Technologies (KAUST). The project objective is to design and build a cost effective autonomous delivery vehicle for the last-mile delivery for e-commerce delivery with the support of National Digital Unit (NDU) of the Kingdom of Saudi Arabia.
Teksbotics (Asia) Ltd. - May 18, 2022