Newage-Innovations LLC Unveils the Revolutionary Key™ for iPhone and Android

Newage-Innovations introduces their inspired invention via the 'Key - The Key Fob Miracle For iPhone and Android' project on Indiegogo. The team behind this campaign is raising the funds needed to bring the revolutionary Key™ to market. 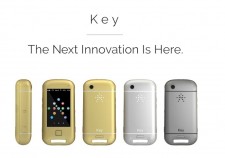 Rockville, Maryland , August 31, 2016 (Newswire.com) - ​​​Newage-Innovations LLC, a technology start-up that plans to revolutionize the smart-key industry, has launched a crowdfunding campaign on Indiegogo to introduce their flagship product. This campaign has a funding goal of $40,000, which needs to be raised in order to bring “Key” to market. Key™ is not your ordinary keyring; it is the world’s first smart multi-functional key fob. It features powerful built-in apps, wireless Bluetooth technology, a touch key dispenser, highly accurate breathalyzer, and much more. The team states, “Gone are the days of searching for your keys, and the wasted moments, finding the right key. Key™ is the most personal mobile device yet, because it’s the only mobile device that you can’t leave home without.”

The idea for Key started as a more convenient way to keep personal keys handy and secure, but it grew into something much more as the brothers behind Newage-Innovations put their heads together and decided to merge modern smart technology with the key fob. Key™ not only provides a safe and secure way to keep keys handy, and accessible with the push of a button, but it also comes equipped with several smart features and built-in apps. The device holds up to 3 main keys inside the housing unit, and has a quick release key ring at the base of the unit to securely hold additional keys. Key™ has several features that promises to make this everyone’s new favorite device. It comes equipped with fingerprint technology to provide greater security, along with a highly accurate breathalyzer to record BAC levels, a Key™ finder App to help track the device if ever lost, a camera, photo gallery, activity tracker, social media and incoming mail, messages, and calls notification, voice control functionality, GPS navigation, an SOS feature, and much more. Not only will the device come pre-equipped with awesome apps, but the team also plans on introducing new apps in the future. Key™ will be available in 3 finishes: gold, silver and mercury grey; and is made from the same grade of aluminum used in the marine industry. The device is ultra-strong, lightweight, and corrosion resistant.

The team at Newage-Innovations has been working very diligently on all of the essential groundwork for their Key™. The prototype is already being used in their office, where they are currently refining firmware, sensor calibration, torque and power optimization, and testing different BAC settings. They are now ready to begin the process of putting Key™ into hands everywhere. The team states “our mission is for Key™ to become the most advanced and user-friendly smart-key ever created, but new age innovation is costly” which is why they have launched their Indiegogo campaign, and hired a team of crowdfunding specialists to help them spread the word. As an added bonus with this campaign, the team is offering supporters the opportunity to pre-order the device from a single Key™ to a distributor pack of 20 units at a substantial savings off of regular retail pricing. They have a projected delivery of 3rd quarter 2017. Full details can be found on their Indiegogo campaign page.

Newage-Innovations was founded by brothers Brian and Desmond Byrd in 2014 with the desire to revolutionize the smart-key industry, and recreate the key holder for the digital age. The team consists of a talented group of professionals who are extremely passionate about mobile electronics and security.

To learn more about the Key™ crowdfunding project Click Here

To contact via email write to Brian Byrd at: support@newage-innovations.com